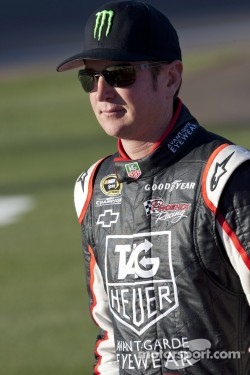 MOORESVILLE, N.C., (March 13, 2012) – The first time. It’s a fairly simple concept with long-lasting implications. Throughout the course of one’s life, an individual encounters a series of firsts, whether it’s something as simple as a first word or first step to more complex milestones such as first love or the purchase of a first home.

This weekend at Bristol (Tenn.) Motor Speedway, Kurt Busch will celebrate a very special first as Sunday’s Food City 500 marks the 10th anniversary of his first career win in NASCAR Sprint Cup Series competition. On March 24, 2002, Busch led 89 laps en route to the win and crossed the threshold into the hallowed ground that is victory lane at Bristol. What no one knew on that cool March day in 2002 is that the win was a precursor for what could only be described as a breakout season for the Las Vegas native.

Busch started the event that day from the 27th position and ran a steady but patient race, taking the lead for the first time on lap 411. He led the next 33 circuits around the .533-mile high-banked, concrete oval, engaging in a close battle for the lead with Jimmy Spencer as the laps continued to wind down. Spencer grabbed the lead from Busch on lap 444 but Busch, having studied and watched many races run at the short track, used the trusty old Bristol “bump-and-run” to take back the lead just one lap later. Busch went on to lead the final 56 laps.

The driver of the No. 51 Phoenix Construction Services Chevrolet has since gone on to win a total of 24 Sprint Cup races – a feat that places him 26th on NASCAR’s all-time win list. The win at Bristol was the first of four wins for Busch in 2002 and paved the way to his third-place finish in the Sprint Cup point standings. Busch would also go on to continue his winning ways at Bristol, winning four of the six races run at the half-mile track from 2002 to 2004.

Busch’s five career victories at Bristol place him in a four-way tie for third on the all-time winner’s list at the track. The group of drivers ahead of Busch on the all-time win list is an elite group featuring former champions and drivers who already have been inducted into the NASCAR Hall of Fame. Former champion and Hall of Famer Darrell Waltrip tops the all-time list with 12 career Bristol wins. Hall of Famer Cale Yarborough is in a three-way tie for second on the list with nine wins, along with former Sprint Cup champion Rusty Wallace and the late Dale Earnhardt. Hall of Famer David Pearson, Kyle Busch and Jeff Gordon share the third-place honors on the win list. Additionally, the five wins by the Busch brothers and Gordon top all active drivers.

Busch already has conquered a number of significant firsts in his career, from his first win to his first pole to his first championship. He has had his first win on a short track, an intermediate track and on a road course. The next round of firsts may not be as major as the ones he’s already accomplished, but they will be firsts just the same. One he’d like to add is to be the first active driver to reach Bristol’s victory lane for a sixth time, something he’ll be working on diligently this weekend.

KURT BUSCH, Driver of the No. 51 Chevrolet for Phoenix Racing:

What are your thoughts on racing at Bristol?

“It’s a place that gives you such an adrenaline rush that is unlike any other track we visit. It’s an exciting track to just walk into. Then, when you make your first few laps, it’s funny how you find yourself out of breath just after making a couple of laps. Then you have to settle in and get the car dialed in to where you‘re going to be competitive on the long run.”

Five Bristol wins is pretty stout. What is it that you like so much about Bristol?

“I don’t know, but it’s always been a track that I’ve just enjoyed. Before it was reconfigured, it was just tough and I liked that. It was mean and you kind of had to let the rough edges drag. A lot of it has to do with just getting up on the wheel and racing as hard as you can when you have your last set of tires. For some reason, it was just something I thrived on and it translated into some pretty good success for us.”

What is your favorite Bristol memory?

“I think it has to be that first win we scored back in 2002. It was just my second full season racing in Cup and I was 24 years old. It was such an awesome feeling to just get to this level. It’s the big time. Then, to be able to get a win, it is literally hard to explain that feeling. If you go back and look at the way it happened, too – moving Jimmy Spencer out of the way – it’s just a pretty big memory for me. You work so hard to get to this level and then, when you win, it gives you that confidence to make you feel like you will make it.”

What is the toughest part of racing at Bristol?

“For me, the most challenging aspect is getting into those long, green-flag runs. It’s about being able to settle into a steady groove and making the best lap times that you can. It’s tough at that place because it’s so fast for a short track and you can get dizzy there pretty quickly. It’s a physical track but it’s also mentally taxing and you really have to be on your game when it comes to the concentration that is required to run well at Bristol.”

What is the difference between Bristol now and the Bristol before it was reconfigured?

“There’s just more room to race whereas, before, there was one lane and that one lane was maybe half-a-car wide. So you really had to be in the same spot every moment of the lap. You couldn’t race side-by-side and, to move forward, you basically had to move people out of the way. The way the track is now, you can race three wide in the corners and not run into anybody.”

Which do you prefer – the old or new Bristol?

“Since they’ve reconfigured it, I haven’t had the success I once had when the track was tougher and meaner. This is definitely a more gentle Bristol than it was. Since they are handing out points and money for the new configuration, it’s what I need to like, but I did really like it better the old way.”

Johnson looks for luck at Bristol