Busch, who was competing in his sixth race with the Denver, Colo.-based team, was coming off a pair of eighth-place results in Texas and Phoenix. 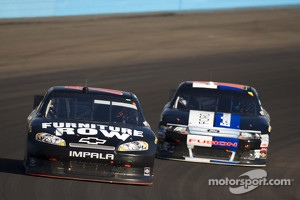 "Finishing the season with three straight top-10s and four straight top-15s – you just can’t ask for much more in a short period of time together,” said Busch, who had an average finish of 10.0 in the last four races.

“We’ve made a tremendous amount of progress in the last six weeks and that gives all of us plenty of confidence heading into the offseason. We laid a strong foundation and I can’t thank the Furniture Row Racing guys enough for a job well done.”

The ninth-place result didn’t come easy for Busch, who started the race from the 26th position. He lost radio communications for a good portion of the race with his spotter and crew chief, forcing the team to rely on hand signals.

“We had radio issues and did not have two-way communication and that made it difficult to dial in the car,” noted Busch. “I could hear them, but they couldn't hear me. It appears we had a short in the wire.”

Busch also had to contend with a surprising fuel issue problem. As he was coming into the final turn on the final lap and running solidly in sixth place, his No. 78 Furniture Row/Farm American Chevrolet started to sputter and then ran out of fuel.

All he could do from that point was coast to the finish line.

“The fuel issue caught us off guard,” noted Busch. “Had I known there was a problem I could have saved two positions. But we had a positive race today. The guys put me in position for a top-five.”

Busch added, “Some of our handling issues have been narrowed down in these six weeks and that's another big plus. We did accomplish our main goal and that was to successfully prepare for the 2013 season.

I also want to express my congratulations to Brad (Keselowski) and Penske Racing for winning the Sprint Cup Series championship.”

The race had 19 lead changes among eight drivers and there were three cautions for 17 laps.