Tire gamble pays off for Kurt Busch. For the second year in a row, a first time winner grabbed the victory in the Food City 500. This time it was second year driver Kurt Busch. Busch, driving the No. 97 Rubbermaid/Sharpie Ford, stayed out during ...

Tire gamble pays off for Kurt Busch. For the second year in a row, a first time winner grabbed the victory in the Food City 500. This time it was second year driver Kurt Busch.

Busch, driving the No. 97 Rubbermaid/Sharpie Ford, stayed out during the final caution flag while others decided to pit. 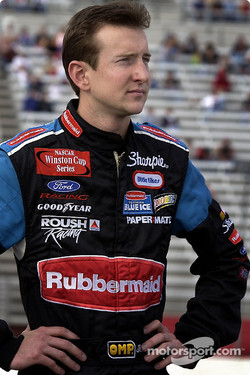 Busch ran the final 157 laps on the same pair of tires. "I saw Elliott Sadler do it here last spring, these tires last forever," Busch said of his gamble to stay out on old tires. "You can't get any better than this."

The race began with Cingular Wireless No. 31 driver Robby Gordon jumping the start, that gave him a black flag for passing the polesitter before crossing the start/finish line.

Hendrick Motorsports' Jeff Gordon, who started on the pole, was involved in a single car spin on lap 83. He ended the race 20 laps down in the 31st position.

Joe Gibbs Racing driver Tony Stewart began the race unsure if he would be able to finish following last week's hard wreck at Darlington, that left him suffering severe back pain. The Home Depot driver, Stewart, was unable to go the entire 500 laps and was relieved by fill-in driver Todd Bodine.

Stewart was the cause of a yellow early on however, when he hit Raybestos rookie contender Ryan Newman, driver of the No. 12 Alltel Ford, from behind. Newman's Ford slammed hard into the wall and suffered severe damage. The Alltel crew spent numerous laps behind the wall to make repairs to the radiator. He ended the race 37th and fell from second in the points standings to seventh overall.

Reminiscent of last year's post race incident on pit road involving Tony Stewart and Jeff Gordon, Robby Gordon, upset with Dale Earnhardt Jr's on track racing style, turned Earnhardt around on pit road. "I don't know why he would be running into me after the race, he's the one that knocked me sideways early. And he tried to run me into pit wall, so I hit him back."

Earnhardt Jr, driver of the No. 8 Budweiser Chevy, commented on the incident by saying; "That 31 wouldn't get out of my way. That's why it takes him three or four times for him to finally get into the Winston Cup Series, because he doesn't pay attention, doesn't know what he's doing."

Stewart's intentional hit on Jeff Gordon last year put him on probation until season's end, along with a $10,000. fine. Look for penalties branching from this incident to be handed out later in the week.