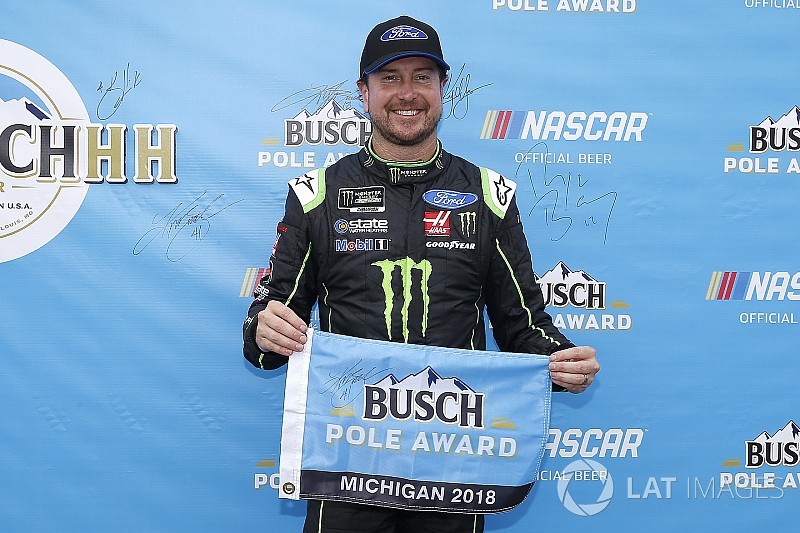 Kurt Busch loves coming to Michigan and on Friday he showed why.

Busch surprised his Stewart-Haas Racing teammate Kevin Harvick with an average lap speed of 203.361 mph in the final round of qualifying to win the pole for Sunday’s FireKeepers 400 at Michigan International Speedway.

Harvick had easily been fastest through the first two rounds.

The pole is Busch’s second this season, third at Michigan and 24th in his Monster Energy NASCAR Cup Series career.

“I had the confidence in the car and my guys had it really dialed in,” Kurt Busch said. “To come to Michigan, and especially it being the manufacturers’ backyard, but the fact that we get to go 217 mph into the corners, it makes it fun and you can fun all the aero balance out the tires.

“I was surprised by tire grip level. I thought the way they did the Goodyear tire test they were going to have less grip and maybe that will happen in the race runs. In qualifying, we got ourselves a pole today.”

Asked how he will translate the qualifying performance into a potential first win of the season, Busch said, “We just need to focus now on race-trim, make sure the car doesn’t burn up one tire more than the other.

“Still, I need to drive aggressive. I need to stay firm on the gas pedal and not be hesitant and trust the grip-level and the aero of our Ford.”

Harvick went out early and again made quick work of the competition in Round 2.

His average lap speed of 203.092 mph was the fastest registered Friday up to this point. He moved to the final round of qualifying along with his three SHR teammates.

Also advancing to the final round were Logano, Hamlin, Bowyer, Newman, Jones, Stenhouse and Almirola.

Newman was the only Chevrolet driver to advance to the Top 12.

Among those who failed to advance were Chase Elliott, who was knocked out at the last minute by a late run from Hamlin; William Byron, Paul Menard, Martin Truex Jr., Jimmie Johnson, Alex Bowman and Daniel Suarez.

“We got better in the last round there, we were just way too tight,” Truex said. “We were way off in practice. It was just one of those days that we chased the balance a lot.”

Harvick set a blistering pace in the first round that saw eight Fords and two Chevys claim the Top 10 speeds and the best Toyota coming in at 13th-fastest.

Kyle Larson, who has won the past three races at Michigan, was the biggest surprise to fail to advance to Round 2. He ended up with the 26th-fastest speed – his worst starting position since the season-opening Daytona 500.

“Our car has been pretty far off all day, just really tight,” Larson said. “I just couldn’t even turn the wheel pretty far. I don’t know what that is.

“We got some smart people on our team that will figure it out and make it better for practice tomorrow.”

Among the others who failed to advance were A.J. Allmendinger, Darrell Wallace Jr., Kasey Kahne, Ty Dillon and Matt DiBenedetto.

“I didn’t think the track changed a lot. We ran pretty much the same speed as practice,” Allmendinger said. “I’m just terrible here.”

Larson: Teams may use new Camaro as "excuse" for poor performance

Fans can now wager on NASCAR races at Dover