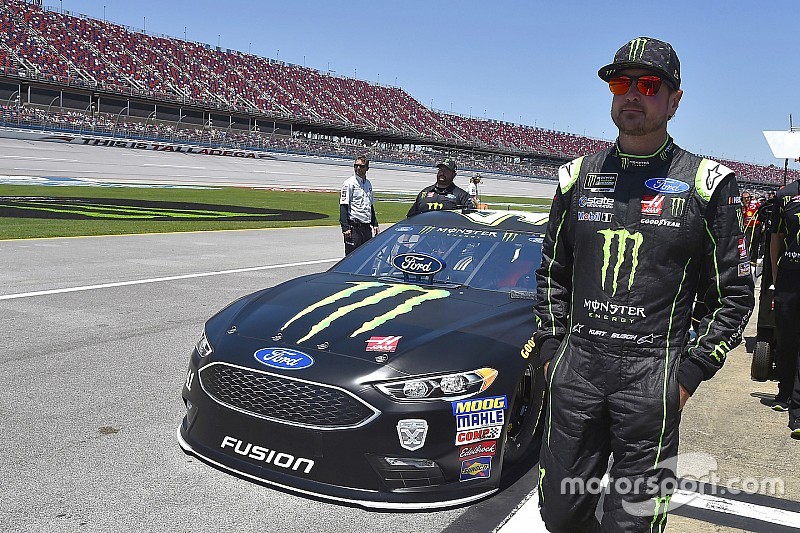 Kurt Busch didn’t leave any doubt about who was fastest at Talladega (Ala.) Superspeedway.

Busch ended up fastest in both rounds of Saturday’s qualifying session and each time was followed by his three Stewart-Haas Racing teammates.

Busch, the last driver to make an attempt, posted an average lap speed of 195.804 mph to claim the pole in Sunday’s Monster Energy NASCAR Cup Series race at Talladega.

The pole is his fifth of the season, 27th of his career and first at a superspeedway.

“Doug Yates and those guys built so much quality (engine) power and you see it in four Stewart-Haas Fords. I’m really happy I got the fast one,” Busch said.

“We’re on the pole. This is my first restrictor-plate pole ever. EV-ER. It’s taken me 20 years but I got one.”

Asked what a fast No. 41 Ford will allow him to do in the race on Sunday, Busch said, “It keeps you in your motorhome. You don’t want to party too hard tonight on Talladega Boulevard. In all seriousness, there are a lot of nerves that come with sitting on the pole for a plate race.

“Is the car all built for speed and is there no handling in it? The fenders are very tight to the tires. Are the pit crew guys going to be cool with getting those fast pit stops with the fenders down on the tires?

“Those are the little things that you think about. The more that I think about things as of late, I just let it rip and go for it.”

Kurt Busch led the way in the first round, easily rocketing to the top of the speed chart with an average lap speed of 195.225 mph.

His SHR teammates – Bowyer, Harvick and Almirola – ended up second through fourth. Elliott completed the top-five.

Also advancing to the final round were Bowman, Johnson, Byron, Hamlin, Kyle Busch, Stenhouse and Truex.

“You try to keep yourself in position the whole race and then see what you can do from there,” Byron said about his approach to Sunday’s race. “You just have put yourself in the right position. All of us (at Hendrick) have pretty good speed so it should be fun.”

Among those who failed to advance to the final round were Daniel Suarez, Erik Jones and all three Team Penske drivers – Brad Keselowski, Ryan Blaney and Joey Logano.

David Starr was the only driver who failed to make the 40-car field.

Martin Truex Jr. says his team is "fired up as they’ve ever been"