One entire display in Busch’s race shop features 16 trophies just from the Bristol (Tenn.) Motor Speedway high-banked, half-mile oval, where the Las Vegas native has been dominant in all three of NASCAR’s top series.

But even though Busch, driver of the No. 18 M&M’s Toyota Camry for Joe Gibbs Racing (JGR), has more trophies than he probably knows what to do with, there’s one glaring omission from another famous half-mile short track – the traditional, 7-foot-tall clock that Martinsville (Va.) Speedway president Clay Campbell’s late grandfather and track founder H. Clay Earles began awarding Martinsville race winners more than five decades ago.

Needless to say, Busch has his sights set on getting that long-awaited maiden victory at Martinsville, the site of Sunday’s STP 500 Sprint Cup race.

Despite the lack of a Martinsville grandfather clock, Busch has plenty of reasons for optimism this weekend, considering how he has been able to pick up his game at the .526-mile paperclip-shaped oval since he was paired with crew chief Dave Rogers.

During a three-race stretch starting when he joined JGR in the spring of 2008, Busch never finished better than 24th at Martinsville. But his fortunes there began to turn around with a solid fourth-place finish in the fall of 2009.

Enter crew chief Rogers in March 2010. During his first full season under Rogers’ guidance, Busch started a strong string of races at Martinsville with a fourth-place run in October 2010.

Indeed, Busch feels like the M&M’s team keeps getting closer and closer to that elusive win at Martinsville with each return. Despite a blank in the win column, Busch’s solid career totals show eight top-five finishes and nine top-10s in his 18 Sprint Cup starts there with five of those top-five finishes coming over the last nine races there. 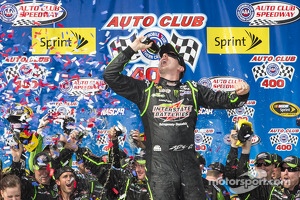 Busch will hope to ride the wave of momentum generated by his first victory of the season last weekend at Fontana. It qualified him for the Chase for the Sprint Cup as long as he stays within the top-30 in the standings and starts every race between now and the Chase cutoff following race 26 at Richmond (Va.) International Raceway. At Fontana, Busch led just five laps but brought home the checkered flag in dramatic fashion as he slid by Stewart-Haas Racing teammates Tony Stewart and Kurt Busch, then held off hard-charging rookie Kyle Larson, all on the last lap, to capture the win.

He’ll hope that momentum continues as he aims for his first Martinsville grandfather clock after knocking on the door during several recent visits to the Southern Virginia short track.

What did it mean to get a win early in the season at Fontana because of the new Chase rules?

“To put that winner sticker above the door this early in the season is a big deal. It certainly takes the pressure off to win a race to get into the Chase, that’s for sure. That being said, myself and this M&M’s team are pretty intense, so we’ll keep working hard, trying to make our racecars go faster and keep trying to add some more wins. But it certainly helps with the pressure of getting that win, that’s for sure.”

Do you expect the intensity to pick up as the Chase gets closer with the “win-and-you’re-in” scenario for 2014?

“I think you’re going to see it pick up, for sure, and I would especially expect it to pick up also if there are guys leading races who have wins like our team has now, and guys running second who don’t have wins to get themselves in the Chase. I think you’re going to see some things happening, so it’s going to be interesting how all that plays out. It’s a part of what this sport is, it’s what the rules grant it, now, and everybody is playing by the same ones, but some might play a little harder than others.”

You’ve been so close to winning at Martinsville, lately. Are you hoping this weekend you can finally get that first win there?

“I certainly hope so. We were so close a couple of times, especially in 2012. I’ve led a bunch of laps there but we just haven’t been able to hold it for the end of the 500 laps. It’s certainly a racetrack that you can be leading the race and think you’ve got a shot to win the thing in the last 30 laps and then getting beat on from behind and getting moved out of the way. It’s certainly a racetrack that’s indicative that, if you’re just a little bit off, then the guys are going to be right on your rear bumper and trying to get by you. For us, it’s been a challenge, but we’re getting better at it and learning some more as we go along. We would like to be able to continue that but also take it to the next level with a win for our M&M’s Camry team.”

Is Martinsville similar to any other short tracks you’ve raced on?

“You say it’s similar probably just because the size of it being a half-mile, but Martinsville is not like any other racetrack that I’ve ever raced on. Not even close. Denny Hamlin would probably be able to assess that statement a little closer because he grew up at Southside (Speedway in Midlothian, Va.) and that is a lot closer to this place. Although it’s a quarter-mile, it’s flat and it’s like racing in a parking lot. For me, I’ve raced on three-eighths-mile, half-mile and three-quarter-mile racetracks all across the West and they were banked, they were flat, but nothing that was so conducive to heavy braking and all that kind of stuff. It’s certainly a challenge to figure out how to get around here and it makes it tough on you because the guys who are good here have run here for that many years. There’s always that transition period of younger guys coming in here and having to spend their time and cut their teeth and learn what it takes to run around this place.”

What is it that makes Martinsville so different when it looks so similar to other short tracks?

“Every track is different. There aren’t two racetracks out there that are the same. I would say probably the closest racetrack I grew up racing on was in San Bernardino, Calif. – it was Orange Show Speedway. That’s closest to what Martinsville is. I only ran Legends cars there, so it’s not a true telling. It was only a quarter-mile. It’s just a tough place because you’re so hard on brakes, but your minimum speed there – everybody’s is – the same, pretty much. You’re looking to find things that will make your car just that much faster there. You want to drive into the corner one foot deeper than that other guy. You want to step on the gas a foot sooner than that other guy, and you want to roll a half-mile-an-hour better than that other guy. That’s why it’s so finicky and so hard there, because everybody runs so tight that, any little thing you can find, it can help a lot.”