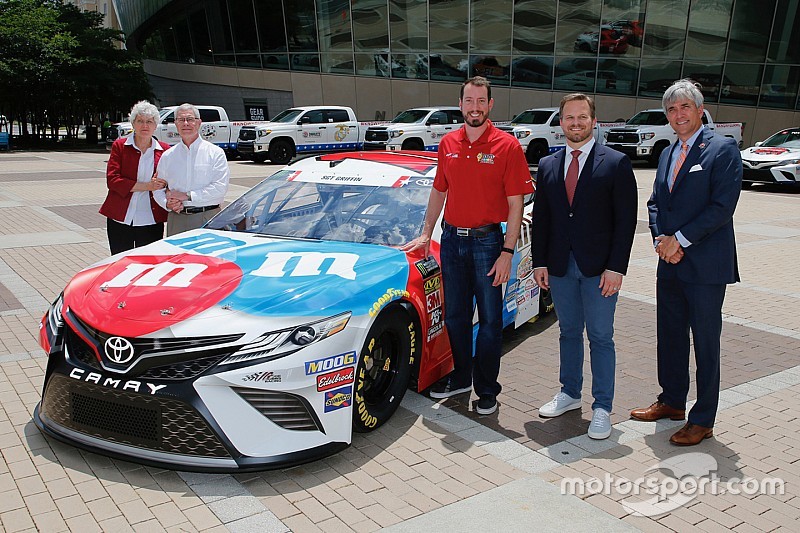 Kyle Busch, the defending Coca-Cola 600 race winner was joined by some special guests as he debuted his paint scheme, including the name of the fallen soldier he’ll honor on his car this year.

For nearly a decade Charlotte Motor Speedway, NASCAR and it’s drivers have taken time to honor fallen soldiers by placing a name of a fallen soldier on their cars for the Memorial Day weekend event.

Kyle Busch kicked off the 2019 program by unveiling his No. 18 M&M’s Toyota Camry Wednesday at the NASCAR Hall of Fame in Charlotte, N.C., where he was joined by Dona and Gene Griffin, the parents of fallen Army Sgt. Dale Griffin.

Griffin lost his life in 2009 during Operation Enduring Freedom and he’ll be honored by having his name across Busch’s windshield as part of NASCAR’s 600 Miles of Remembrance program.

“It means a lot,” Busch said. “Having the opportunity to work with NASCAR and NASCAR Salutes to honor and remember our fallen who have given their lives to give us our freedom.

“It means a lot to have our Memorial Day weekend race, the Coca-Cola 600 at Charlotte because it’s our home and to have the opportunity to carry a fallen (military) member’s name on our race car is the ultimate honor. Being able to meet those families and spend time with them, hear their stories and hear who we’re honoring is what means so much to me and the rest of the field.”

Speedway Motorsports Inc. President and CEO Marcus Smith said the 60th Coca-Cola 600 promises to create lifelong memories for every fan through its spectacular pre-race salute to the military and the race that will follow.

“We take a lot of pride in the Coca-Cola 600 being the biggest celebration of all those who have served and who currently serve our nation’s military,” Smith said.

Charlotte Motor Speedway also announced that there will be a 30-second moment of remembrance following Stage 2 of the Coca-Cola 600 with cars lined up on pit road with their engines off as the competitors, crew members and spectators in attendance will observe a moment of silence in honor the fallen American soldiers who gave their lives serving their country.

Gene Griffin, Sgt. Griffin’s father, said that his son’s legacy will be enhanced thanks to Busch, Joe Gibbs Racing, NASCAR and Charlotte Motor Speedway with his son’s name on Busch’s car and the emotional mid-race moment of remembrance.

“I’m overwhelmed,” Gene Griffin said. “I’m so thankful for everyone who’s willing to stop and remember those who paid the ultimate price. We’ve been so blessed with the relationships we’ve created here. We’ll carry this in our hearts forever.”