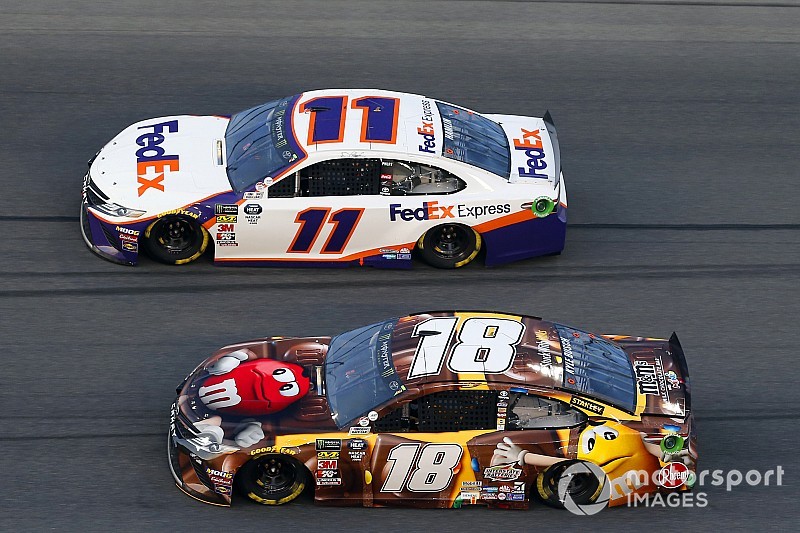 Kyle Busch came one position short of winning the Daytona 500 in his 14th attempt Sunday, and teamwork on a late-race restart may have played a role in his latest defeat.

Busch had never finished higher than third in NASCAR's biggest race entering Sunday, but found himself out front for a two-lap shootout at the close of this year's Daytona 500.

He and teammate Denny Hamlin worked together on several restarts to ensure the two drivers got lined up on the bottom, saying, "Here at restrictor plates, when you have guys like that up front, you try to work together as much as you can, and that situation kept presenting itself, and it just was what it was.

Teamwork on and then off the table, and then on again

But on this particular restart, the No. 11 opted to put teamwork aside and race for it. Hamlin edged ahead and then another crash brought the yellow flag back out. At that moment, Hamlin was now the race leader.

"It's first and foremost to try to make sure that we at least get a JGR car to Victory Lane. They (Hamlin) didn't want to do it the previous restart, but then since he got the lead, he wanted to do it again.

"You know, it is what it is. Just at least we got a JGR car in Victory Lane. That's the big picture. That's what matters, and we move on."

Busch later added he thought he was "kind of funny" how the idea of teammate preservation was dropped and then picked up again when the situation changed.

"That one restart where Denny wanted to race, I took the bottom because I felt like having the 14 behind me, and the 14 was pretty fast, and the 22 was behind him, I felt like that was going to be ‑‑ no, you were on the outside, it was the 34.  I felt like that was going to be a good lane for me to be in front of, and they came off of 2 and they all spread out, and that's when the 14 got crashed, and then the 11 had the lead because he was ahead at the time.  So that kind of cost us.

"And then he wanted to go back into teammate preservation mode again.  Kind of funny how it swaps back and forth a little bit, but it is what it is."

Busch placed second behind Hamlin, his best 500 finish to date. He also won the second stage and leaves Daytona International Speedway third in the standings, but ultimately, this day was about one person: J.D. Gibbs.

"It's obviously very, very good, and a boost of confidence and everything else for everybody included with Joe and all the things that Joe and the family had gone through over the last few weeks.

"And losing J.D. ... it certainly is a very bittersweet situation for myself because I'd have much rather have been the one to win the race and be in Victory Lane and celebrating with my team and with everybody at Joe Gibbs Racing and being a part of the J.D. celebration, but overall, you know, you couldn't be more thrilled for all the 500 people back at Joe Gibbs Racing that knew and respected and obviously looked up to J.D. for the person that he was and for the relationships that he gave all of us."

McDowell: "My team doesn’t pay me to push Joey Logano to a win"