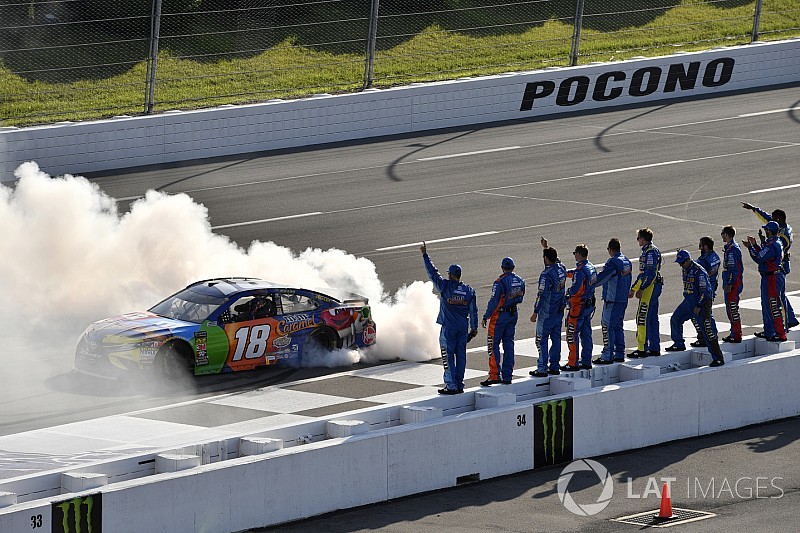 It didn’t take long for Kyle Busch to even the score with Kevin Harvick.

Busch outdueled his Joe Gibbs Racing teammates Erik Jones and Daniel Suarez on a restart in overtime and hung on to win Sunday’s Gander Outdoors 400 at Pocono Raceway.

The win is Busch six of the season in the Monster Energy NASCAR Cup series, tying the series lead held by Kevin Harvick, who just won his sixth race a week ago.

"The last restart I spun my tires a little bit too much and he got a really good run. I think that gave Jones an opportunity to make it three-wide going into (Turn) 1. They got into racing (each other) and I kind of got away.

"Glad to get another win for the Rowdy Nation fans here at Pocono. We swept the weekend."

Following the break between Stages 2 and 3, Byron took over the race lead as one of several drivers who elected to stay out. On the restart on Lap 106 of the scheduled 160, he was followed by Kyle Busch and Suarez.

Ty Dillon, David Ragan and Kasey Kahne were all penalized for speeding on pit road while making their respective stops during the break.

Byron held serve on the restart as Jones moved up into the runner-up position and Kyle Busch took over third.

On Lap 112, Kyle Busch got inside of Byron and took the lead for the first time in the race. About the same time, Kurt Busch dove down pit road with a left-front flat tire.

Suarez got around Byron on Lap 114 to move into the runner-up position as Jones and Elliott followed to take over third and fourth, respectively.

On Lap 121, Brad Keselowski appeared to cut a tire and slammed the Turn 2 wall to bring out a caution.

“I blew a rear tire entering the corner and wrecked,” Keselowski said over his radio. “Spun out before I even got in the corner. I lost the decklid, pretty much done here.”

Kyle Busch was the first off pit road and led the way on the restart on Lap 125 followed by Suarez, Kahne, Jones and Elliott.

Bowyer was penalized for speeding on pit road and had to restart at the rear of the field. Harvick and Almirola made contact on pit road, forcing Harvick to make another pit stop for repairs.

Right after the restart, the race returned to caution as Landon Cassill No. 00 appeared to lose an engine and oil was reported from Keselowski’s car in Turn 1. Keselowski then took his No. 2 Ford to the garage.

The race returned to green again with 28 laps to go with Kyle Busch leading the way followed by Suarez and Elliott. Harvick restarted in 27th.

With 25 laps remaining, Kyle Busch held a slight advantage over Suarez with Elliott not far behind in third. Harvick had made his way up to 20th.

Joey Logano was forced to pit on Lap 139 with a flat tire and after having slapped the wall.

With 15 laps left, Kyle Busch had moved out to a 1.8-second lead over Suarez. With 14 remaining, Harvick had moved back into the top 10.

On Lap 154, Darrell Wallace Jr. lost his brakes on the frontstretch, drove through the grass to scrub speed and still slammed the Turn 1 wall hard to bring out a caution and bunch the field. A red flag was displayed to clean the track of debris.

“No brakes… oh (expletive),” Wallace said over his radio just before the hit.

Wallace gingerly got out of his car, sat down beside it for a few minutes before walking gingerly into the ambulance.

When the race returned to green with three laps left, Kyle Busch led the way, followed by Suarez and Elliott. Harvick was up to eighth.

With just over one lap to go, Ricky Stenhouse Jr. and Almirola both spun to bring out yet another caution and send the race into overtime. Harvick had made his way up to sixth.

Wallace: Pocono crash "scared the hell out of me"