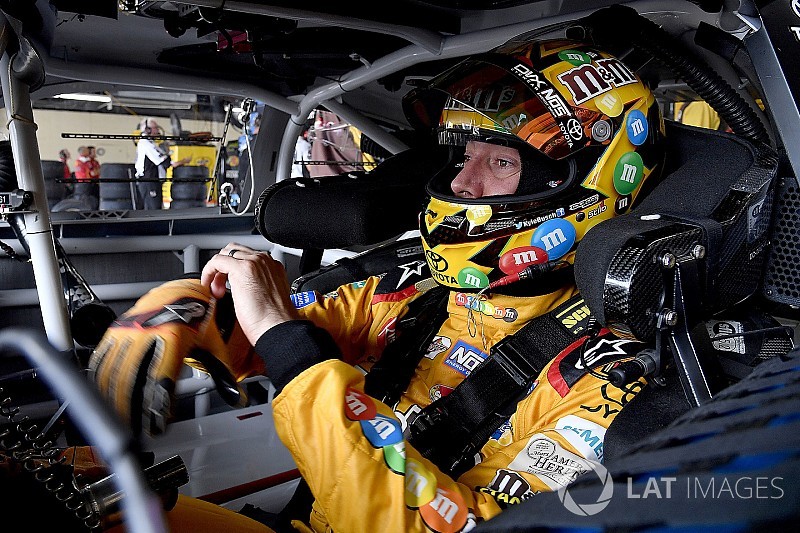 Kyle Busch was on an island at the end of Sunday's rain-shortened NASCAR Cup race at Michigan.

Busch was the only non-Ford driver inside the top eight, finishing fourth in the No. 18 Joe Gibbs Racing Toyota. Although his car handled well, he was helpless against the rival Ford teams on the straightaways.

“The blue ovals were just tough today – it wasn’t anything about SHR (Stewart Haas Racing). They go down the straightaway really, really fast. We have a hard time keeping up with them there, but our car through the corner was really awesome," said Busch. "The M&M’s Camry was really good there after yesterday’s practice.

"I thought we had something for them and if it was going to be a little bit hotter and sunnier today, I felt like we were going to be really good. That just wasn’t the conditions for today, so chilly and cool and lots of grip and that was better for all those guys, but we gave it a hard fought fight and come home with what we could there – a fourth. Not too shabby. I thought we had third and then Kurt (Busch) blew my doors off on the straightaway and we’ve just got to get better there and try to make it up and be able to put on a fight here later on this year.”

Despite conditions not being in his favor, Busch felt a long green flag race could have played into his hands, had the race gone to its scheduled conclusion.

“If it would have went green the rest of the way, I felt like we could keep up with them. I felt like our long-run speed was better than theirs and if we could have had some green flag stops and maybe made up ground on that we would have been alright.”

Bringing a knife to a gun fight

The Ford armada also combined to lead all but 12 laps during the abbreviated race. Busch, who has won four races so far this year, compared the battle to bringing a sharp knife to a gun fight.

"We were the lone Toyota up there fighting with all the blue ovals, so, you know, they were super, super fast. They go down the straightaways really quick and we had to struggle to be able to out run them there, but through the corners, we were really good, so Adam Stevens (crew chief) and myself and our team and our organization, we did our job, so all we can do is keep trying and keep getting better, keep trying to bring home a good fight and it doesn’t matter how sharp your knife is – you ain’t going to beat a gun fight.”

Clint Bowyer won the race after NASCAR stopped the event on Lap 133 of 200 due to rain. Kevin Harvick finished second and Kurt Busch third.