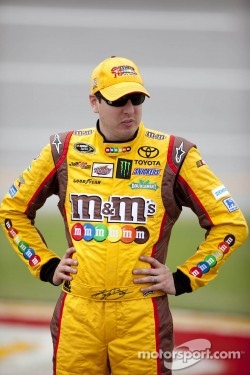 The talented 27-year-old driver started his current hot streak with a win at Richmond (Va.) International Speedway April 28, and carried that momentum through the four May races by posting a runner-up finish at Talladega (Ala.) Superspeedway on May 6, fourth at Darlington (S.C.) Raceway on May 12, fourth at the non-points Sprint All-Star Race at Charlotte (N.C.) Motor Speedway on May 19, and third in the May 27 Coca-Cola 600 last weekend to end the month.

With the month of June now upon him, Busch hopes to maintain his hot hand and keep cranking out strong results in June as the NASCAR Sprint Cup Series heads to Dover (Del.) International Speedway for Sunday’s FedEx 400 benefiting Autism Speaks. The 1-mile concrete oval – appropriately named the “Monster Mile” – can be demanding on driver and equipment, so patience over the course of the 400-lap race, along with solid work from the over-the-wall crew, is vital for a successful day at Dover.

Busch will not only try to keep his momentum from the month of May going this weekend, he’ll also be shooting for his fifth consecutive top-10 finish at the “Monster Mile” and hopes to recreate the magic of his May 2010 race that saw him lead 131 laps en route to his second career Sprint Cup victory at the track. Busch has not finished worse than sixth in his last four Dover starts, beginning with his June 2010 win there.

And, on the subject of streaks, Busch has finished no worse than 11th since the April 14 event at Texas Motor Speedway in Fort Worth, a string that includes four consecutive top-five finishes and five consecutive top-10s. During that time, the Las Vegas native has vaulted from 16th to his current position of eighth in the Sprint Cup standings.

So, as the series heads to the Delmarva Peninsula this weekend, Busch knows that, based on recent history, Dover is an ideal venue for him to carry his May momentum into the month of June on the right foot.

Has your team turned the corner from where you were earlier in the season?

“I think we’re good. We’re definitely a contender each and every week with our M&M’s Camry. We’re just not able to get over that hump, aside from Richmond, to get us some more wins. I wish we knew what it was to get us to that point, but I know we’re consistently running up front and we’re competitive every week. There’s just a little bit of something lacking, whether it’s speed or whether it’s longevity in the runs that’s kept us from winning even more than we have. Both our car and Denny’s (Hamlin, JGR teammate) car have been very competitive and everyone at JGR continues to work hard, and I feel like we are making strides each week. We want to find what we need by the time the Chase comes around and have a shot at this championship.”

What does it take to be successful at Dover?

“Dover, being a concrete track, is challenging. They’re all a challenge, but Dover is especially so, just because of the way you have to run around that place. The way tires sometimes wear out. The way the rubber gets put down there. You’ve got to be fast through the corner. Two-thirds of your lap time is through the turn rather than down the straightaway, so you definitely have to make sure you have a good-handling racecar – one that’s good in the beginning of the run on low air pressures and one that’s good at the end of the run on high air pressures, and even through traffic, too. Some of the most challenging times are when you’re trying to get through traffic with guys.”

Do you enjoy racing at Dover?

“It’s definitely a fast racetrack. It’s a fun racetrack, too. It makes it interesting when you get to traffic, when you have to pass guys, when you’re kind of falling down into the hole and jumping back up out of the hole to the straightaways. It’s a good place to race. It’s a competitive racetrack and, when the rubber gets laid down, it definitely changes the whole atmosphere and the whole way you run around that place.”

Does going from concrete to asphalt change the way the car handles?

“We don’t run on an asphalt racetrack that’s banked like that or shaped like that. The mile tracks we go to that are asphalt are Phoenix and Loudon, and they are relatively flat. The concrete just changes the feel a little bit, of course, and changes the way you approach the racetrack, too.”

You have two Sprint Cup wins and a competitive history at Dover. What is your outlook with your past history there?

“I love that place. It’s fun to race there and it’s a place I’m looking forward to going to with our M&M’s Camry. I went there when I was 18 to race in the Nationwide Series for my first time. It will scare you the first time you race there. You carry so much speed at this racetrack and, for it to be a mile in length and for it to be concrete – concrete surfaces that we race on, anyway, are a little bit slick. It’s definitely a roller-coaster ride and you need to treat it like it’s fun and not to be scared of the place, I think, because you can get so much out of that place. There are two ways about it – you can probably be really, really good there, or really, really bad there. Some days you’re going to be better than others, obviously, with how you can get your car set up compared to the competition.”