Kyle Busch is a lock for the playoffs 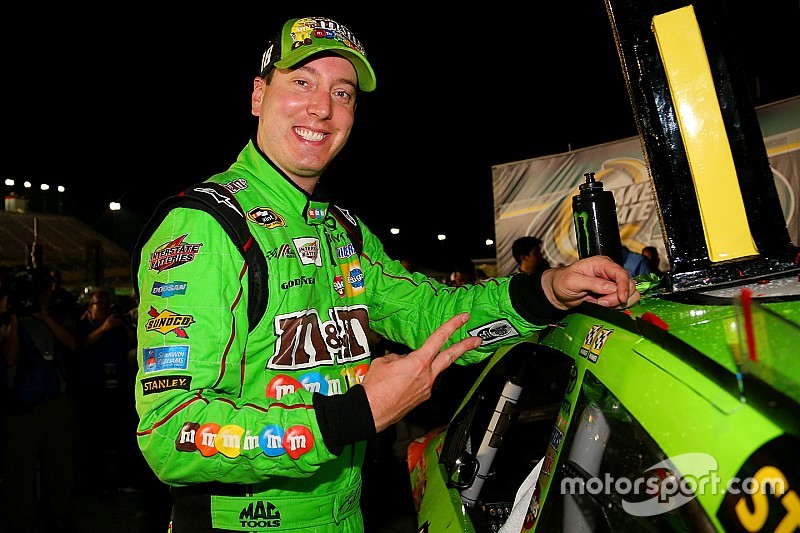 Yes, the clock is ticking for Kyle Busch.

With eight races to determine the 2015 Chase for the Sprint Cup field, the challenge for the driver of the No. 18 Joe Gibbs Racing Toyota is to climb from 35th in the point standings — where Busch currently sits after missing the first 12 races of the season — into the top 30.

Since his return at Charlotte Motor Speedway in May, after Busch suffered from a broken right leg and right foot during a wreck in the XFINITY Series race at Daytona, he’s had moments of inconsistency.  But Busch has never lacked speed. More importantly, Busch has already overcome the toughest test — winning, twice.

And given his recent run of two wins in the last three races — including at Sonoma Raceway a track that seemed an impossible place for a victory when he hobbled across the stage at Joe Gibbs Racing three months ago — Busch is a lock to make the Chase.

I’ve been real happy with things and we just have to keep that going.

“Everybody has the same goals to make the Chase and to get those wins and to be top-30,” Busch told Motorsport.com. “I think if we were a guy or a team that was sort of 13th through 16th or whatever and didn’t have wins then we’d be in the same position we’re in right now – we’re racing for points. We have to get those points to be the highest eligible guy without the win.

“But our circumstances are a little different – we’ve got wins and yet we still seem to be out. We’re just doing the best job that we can each and every week to continue to put good cars on the race track. Adam (Stevens, crew chief) and the guys have done a phenomenal job of that so far this year. Especially with me being in the car, I’ve been real happy with things and we just have to keep that going.”

Sure, pundits have tried to predict the average finish Busch will need to earn one of the 16 spots in the playoffs. However, a specific number is inexact at best. No one knows for sure exactly how many points he will need to score in the next eight races to move into 30th place. Some predict that Busch needs an average finish of 17th is only a rough estimate based on the results to finish 30th in 2014.

But there are exact numbers that are much more useful.

Busch has scored 200 points (including bonus points) in the seven races he has run. Cole Whitt,  who is currently 30th in the standings, has scored 287 points in 18 races. In order to overtake Whitt, Busch must outscore Whitt by an average of 11 points (11 positions per race exclusive of bonus points) over the next eight races.

David Gilliland is the only other realistic threat to Busch making the Chase. Gilliland has 282 points, so Busch will have to finish an average of 10.5 points or positions ahead of Gilliland, who is 31 st in the standings, Gilliland has an average finish of 28.5 in 18 races this year. Compared with Busch’s 16.9 average finish, that’s a differential of 11.6. Busch has scored 10 bonus points to Gilliland’s 3 this year.

Busch, who has wins at seven of the next eight venues, will have no difficulty overtaking Brett Moffitt (32nd, 245 points), Alex Bowman (33rd, 242 points) and Michael Annett (34th, 208 points) within the next few races. Nine of his 31 Cup victories have been earned at Bristol and Richmond alone.

And on Sunday, Busch rolls off fourth in the 5-hour Energy 301 at New Hampshire Motor Speedway where he won in 2006 but more importantly has finished second in three of the last four starts at the Magic Mile. Overall, Busch has seven top fives and 10 top 10 finishes at NHMS where he has led 460 circuits.

“Certainly over the last few weeks we’ve done a decent job at being able to run up front, contend for wins and obviously that momentum is just kind of starting to build,” Busch said. “We hope to continue that one here this weekend at New Hampshire. Looking forward to the Interstate Batteries Camry and making sure we can have another good, strong run here.

“Last year we had some really good runs and some opportunities to finish well. Our car started the races really good. It seemed like other guys made some good adjustments throughout the race and kind of got better than us. Hopefully here this weekend we can work on that, fix those problems and still continue on to have some decent runs here to try to salvage some more wins.”

Hot weather takes its toll on drivers at New Hampshire