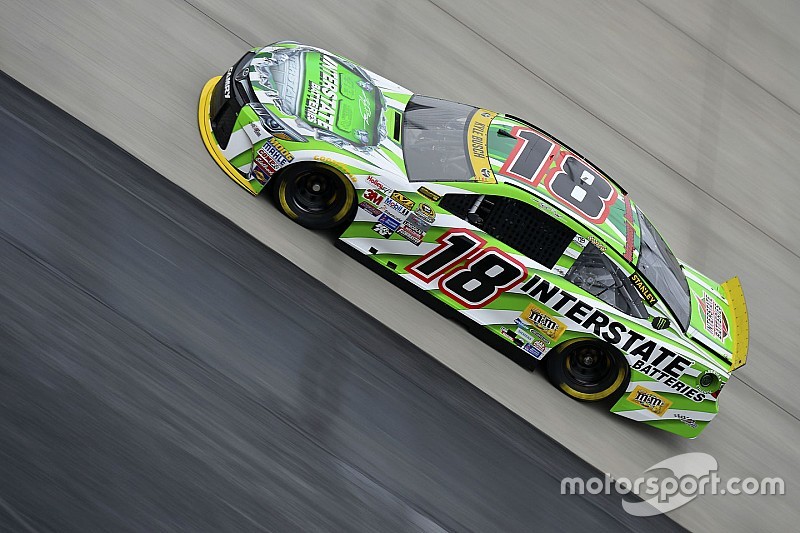 Kyle Busch came into Dover on the wrong side of the cut line, but he got up on the wheel and avoided elimination Sunday.

Busch's 2015 season has been far from the status quo. His leg injury in February caused him to miss the first eleven races of the year. He returned with a vengeance, winning four races and launching himself into the Chase.

At New Hampshire, a tire failure sent his 2015 title hopes careening into the wall. He entered Dover 13th in the championship standings and with ground to make up in order to keep the No. 18 alive in NASCAR's postseason.

He did just that, finishing second to race-winner Kevin Harvick after leading 19 laps himself.

"It was a really good day for us," said Busch. "I can't say enough about this entire Interstate Batteries team. They did a great job today. Adam Stevens gave me a great piece and when you look at the amount of practice time we had, it was pretty hard to figure out what you had."

"We had a second-place car and we finished second with it; nothing to hang our heads about."

A slow start to the weekend

However, the start to the weekend had the younger Busch a bit pessimistic. In the limited practice that was available due to inclement weather, he struggled to find the balance in the car, posting the 19th-quickest time in the opening session.

"I had a little bit of concern just based off the short amount of practice time that we got and the way the car was feeling in those practice sessions. I just wasn't quite as confident as I wanted to be. I never really got a good feel for what I thought I needed to race.

"You know, I shouldn't have been too worried, I guess. Should have put my faith in my team."

The points were incredibly tight around the cut line as the checkered flag neared. Single digits separated a number of drivers (including Busch), but the Joe Gibbs Racing driver wasn't paying attention to any of that.

"I think when you’re in the position that we were in when we were running second there the whole race, you don’t have to watch it. You just do the best you can and that was the best that we were going to do today."

The points will be reset to zero, giving each of the 12 remaining contenders a clean slate heading into Charlotte Motor Speedway for the start of the Contender round.