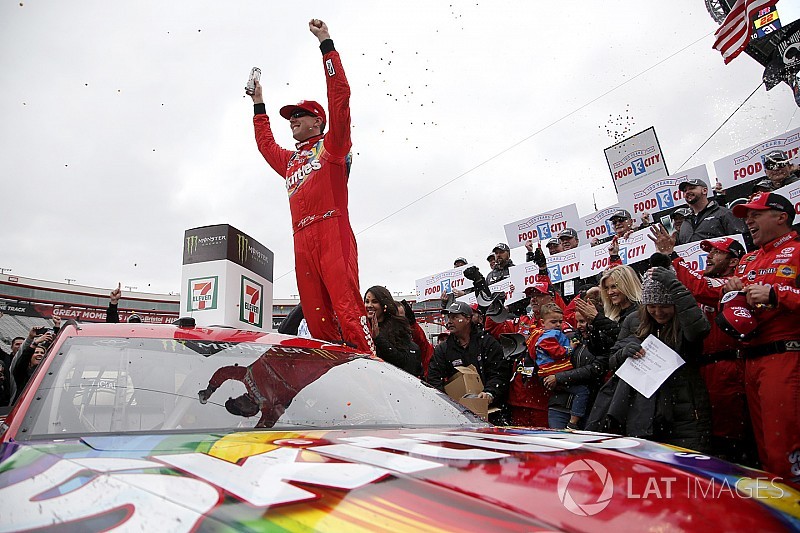 After a lengthy delay, Kyle Busch made it two in a row in the Monster Energy NASCAR Cup Series.

“It was the best right at the end," said Busch. "I know (Kyle) Larson was a little bit loose right there. It seemed like he was over driving and trying to hold the bottom, but he was slipping out of the bottom and I got a huge run on him and got to him and it was just on," Busch said after the race.

"I knew I might as well just take the opportunity that I got right now. I knew it was a little early because you tend to try to want to think about saving that bump and run deal for the last lap, but I just took my chance with it.

"If he got back to my rear bumper, then so be it. I think that’s fair game and being able to race that way. Fortunately, I was able to run away from him and he couldn’t get back to me.”

Busch said the change Monday to longer green-flag runs then the stop-and-stop nature of Sunday's start of the race was to his benefit.

"We knew we were going to have a great long run car. We just had to get there and had to get some long runs," he said. "Actually (Larson) was better than us right there before that last caution came out, so I don’t know what happen to ours.

"We just got really, really bad tire vibrations and just wasn’t able to run as hard as we wanted, but we got it. Came in, got them four tires put on it and man we were fast there at the end. We chased those guys back down.”

The race began on Sunday but inclement weather halted it before the completion of the first two stages, which would have made it official. It resumed on Monday on Lap 205 of 500.

Busch will have a chance to match Kevin Harvick with three consecutive wins with another victory Saturday night at Richmond (Va.) Raceway.

Stenhouse had too many men over the wall during the pit roads and had to start Stage 3 from the rear of the field.

Denny Hamlin quickly powered to the lead on the restart as Keselowski dropped to second.

On Lap 293, Larson had worked his way around Kyle Busch and Larson and into the lead for the first time since early in the race.

Busch settled into the runner-up position on Lap 314 with Keselowski moving back to third.

White navigating lapped traffic, Larson was hit by Ryan Newman and send for a spin while leading the race on Lap 324. Busch nearly hit Larson as he was spinning.

On the restart on Lap 330, Kyle Busch held the lead followed by Keselowski, Larson, Johnson and Bowman.

Reed Sorenson slammed into the Turn 3 wall on Lap 353 to bring out the 10th caution of the race. Kyle Busch was the first off pit road but Daniel Suarez elected not to pit and took over the lead on the restart on Lap 366.

He was followed by Busch, Johnson, Keselowski and Larson.

It took just over a lap for Keselowski to power into the lead with Darrel Wallace Jr. moving into second.

Wallace powered around Keselowski to take the top spot for the first time in the race on Lap 375.

Six laps later, Kyle Busch got around Wallace and back into the lead with Larson in second and Newman in third.

On Lap 391, the caution was displayed for more inclement weather, a mixture of rain and snow. The race returned to green on Lap 400.

With 61 to go, Larson got around Busch and back to the lead followed by Johnson, Stenhouse and Newman. Keselowski fell off the pace and a lap down with what he described as a tire issue.

Larson held a more than 2-second advantage over Busch with 50 laps remaining.

On Lap 471, Keselowski got into the wall to bring out another caution. Larson was the first off pit road and held the lead when the race returned to green 22 laps left in the race.

With 15 laps remaining, Kyle Busch moved into second, about a half-a-second behind Larson.

The win is Busch's 45th in the Cup series, breaking a tie with Bill Elliott for 16th-place on the all-time list.