Kyle Busch: shooting for a triple-double

HUNTERSVILLE, N.C. (Aug. 20, 2013) – In basketball, a triple-double is the accumulation of a double-digit totals in three of the five statistical categories in a game. The most common triple-double combination is double-digit points, rebounds, and assists.

When it comes to NASCAR, Kyle Busch has single-handedly made doubles and triples a household racing term.


The driver of the No. 18 Doublemint® Toyota Camry for Joe Gibbs Racing (JGR) has swept the weekend of NASCAR Sprint Cup Series and Nationwide Series races at several tracks – a total of nine times, to be exact. But by far his biggest sweep came in 2010 at the .533-mile high-banked bullring known as Bristol (Tenn.) Motor Speedway, where he posted the first “triple’ in NASCAR history by winning the Sprint Cup, Nationwide, and Camping World Truck Series races that week.

Busch’s record still stands, and he’ll shoot for another “triple” this weekend at Bristol, armed with a “double” as the iconic chewing gum brand Doublemint will support his Sprint Cup machine in Saturday night’s Irwin Tools night race. 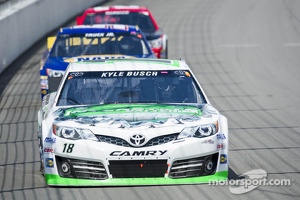 While he’s a factor anytime he makes a trip to Bristol, it’s interesting to note Busch didn’t immediately take to the place. During his rookie year in 2005, he posted finishes of 28th and 33rd. But Busch’s record in his last 15 starts at the “World’s Fastest Half-Mile” has been nothing short of amazing. After bringing home finishes of eighth and second in 2006, Busch captured his first Bristol Sprint Cup win in March 2007. The track was resurfaced after that race and, since then, nobody has been better at the concrete short track than Busch. He has added four more wins and a total of nine top-10s in the last 12 Sprint Cup races contested at Bristol.

This weekend’s event will mark the third of four races in 2013 that Doublemint will serve as primary sponsor for Busch. The brand’s mint paint scheme will also adorn Busch’s No. 18 Toyota during the first race of the Chase for the Sprint Cup Championship at Chicagoland Speedway in Joliet, Ill., next month.

After finishing in the runner-up spot at Bristol in March, it’s a safe bet Busch will again be in contention for his sixth career Sprint Cup win at Bristol, and thus, he’ll hope to have his broom handy yet again after adding another triple-double to his already gaudy numbers at the World’s Fastest Half-Mile.

KYLE BUSCH, Driver of the No. 18 Doublemint Toyota Camry for Joe Gibbs Racing:


What makes you so good at Bristol Motor Speedway?


“I’m not exactly sure what makes me so good at Bristol. I’ve just had a lot of success there, but I’ve also had some misfortune there, too. Ever since I got through my rookie year, I’ve just taken a liking to the place. Of course, I’ve been able to get some help from my brother (Kurt). He’s always been really, really good there. But, when they changed the track to this current surface in 2007, I just really took to it right away. I really liked it and I’ve been fast there, but also I’ve had great racecars from Joe Gibbs Racing. It’s just a fun racetrack no matter what series I’m running there. You really have to be on your game because, you make one mistake, or someone else makes one mistake, that’s it. We’re hoping things will fall in place this weekend with our Doublemint Camry and we get to victory lane.”

What is your most memorable experience at Bristol?

“The one that stands out the most for me is August 2010 – being able to do the sweep. We won the Truck race on Wednesday night, backed it up with the Nationwide race Friday and took home the Cup race on Saturday night.”

What is the most challenging aspect of Bristol?

“I think the most challenging aspect of Bristol is just how difficult it is to transition through from the straightaways to the corners, back to the straightaways and have your car set up in order to do all that. Sometimes you can be really loose getting in, or you can be really tight in the middle – you just seem to never be able to get a good-flowing car that works well there. Drivers have to do a lot of manipulation with the racetrack with their car in order to try to make the best of it.”

After all the race wins at Bristol, what did it mean to earn your first Sprint Cup pole there back in March?

“Certainly starting up front there at Bristol can mean good things, but it doesn’t always work that way. I’ve won plenty of races there starting at the back. We thought we would have a shot for the pole back in March, but we thought that many times there before and we’ve ended up 30th or something. We backed up our practice time, which was good, and the car felt great during the lap. The track is getting a little bit of age on it so it’s getting a little bit rougher and that’s about all that we felt different from what we’ve had here in past years. In the race, we probably had a sixth-place car and we fought our way to second place in March. Hopefully, we can bring a winning car this time and fix some of the tight-handling issues we had there in the spring race.”

How have you figured out the best way to get around Bristol Motor Speedway?

“It has just kind of really worked well together. It’s a fun place that you like going to. You enjoy the race around there. We grew up at the ‘Bullring’ (in Las Vegas) and stuff like that. They aren’t as banked as Bristol is, but I love going and racing at Winchester (Indiana) and at Slinger (Wisconsin), Salem (Indiana) – those are all really high-banked racetracks that are a half-mile in distance, or a quarter. They’re really fun to race around and you kind of get a great feel for racing in a bowl. You go down the straightaway and you slam it into the corners and you mash the gas and you kind of sling right back out of the corners. It’s a lot of fun to do that. It’s kind of an art. Some guys are really good at it, and some find a knack that makes them really good at it and makes it seem easy.”

What makes Bristol Motor Speedway so unique and a place that fans love?


“Bristol Motor Speedway is one of the best racetracks on the circuit. All the fans love it because of the excitement, the run-ins, and the close-quarter action with all the cars being packed on top of one another at a half-mile racetrack with us 43 lunatics running around in a tight circle. With the fans, the atmosphere there always makes for a good time.”

Ragan is ready to race under Bristol lights

Bobby Labonte gets set for race under Bristol lights