Dominance. In the annals of sports lore, what constitutes a feat of pure dominance?

How about when New York Yankees pitcher Don Larsen threw the only perfect game in World Series history against the Brooklyn Dodgers in 1956 … the UCLA Bruins men's basketball team dominated the college ranks in the 1960s, losing only twice in four years … the Miami Dolphins put together a perfect 17-0 season that ended with a Super Bowl victory … the 1992 U.S. Olympics basketball "Dream Team" steamrolled the competition on their way to the gold medal in Barcelona, Spain … the 1985-86 Boston Celtics went 40-1 at the Boston Garden en route to the NBA title.

All of these are fine examples, but when it comes to NASCAR and today's drivers and race tracks, there is no better pairing than Kyle Busch and Bristol Motor Speedway. 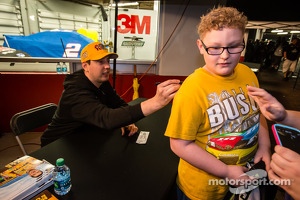 While Busch doesn't have the most NASCAR Sprint Cup Series victories at the .533-mile track nestled in the mountains of Northeast Tennessee -- that honor belongs to NASCAR Hall of Famer Darrell Waltrip with 12 -- it is easy to see why he'll be a favorite to win Sunday's Food City 500 (1 p.m. ET on FOX).

"When they changed the track starting at the end of 2007, I just really took to it right away," said Busch, who has a record 15 victories at Bristol across all three of NASCAR's national series. "I really liked it and I've been fast there, but also I've had great race cars from Joe Gibbs Racing.

"It's just a fun race track no matter what series I'm running there."

In 18 starts in NASCAR's premier series at Bristol, Busch has compiled five wins, eight top fives, 12 top 10s and 1,431 laps led. The victories and laps led are personal bests for the Las Vegas native. Kurt Busch (Kyle's older brother) and Jeff Gordon are the only other two active drivers with five wins at the track. 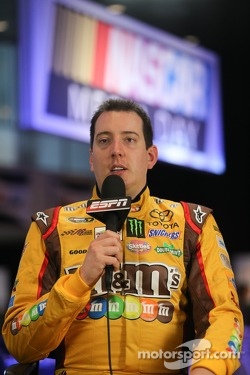 His first Bristol win came March 2007 in a green-white-checkered finish. He followed that up with a Bristol sweep in 2009. His last two wins at the track came in August 2010 and March 2011. Since his last win, he has two top-six finishes, including a runner-up performance in the March 2013 event.

In the first three races of 2014, Busch has eclipsed the 100 driver rating figure and collected fastest laps run in each; however, he only has one top-10 finish to show for his efforts – a ninth at Phoenix. He finished 19th at Daytona and 11th last weekend in his hometown. He's currently 10th in the standings, 38 points behind leader Dale Earnhardt Jr.

Busch is approaching a major series milestone, one that could come this Sunday. If he leads 140 or more laps -- an accomplishment he's achieved four times at Bristol, most recently in March 2011 -- he will become the 15th driver in NASCAR Sprint Cup Series history to lead 10,000 laps.

In August 2010, Busch pulled off the rare hat trick by becoming the first driver in NASCAR history to win all three national series events at the same track. Rightfully so, it's his most memorable moment at the track.

"We won the Truck race on Wednesday night, backed it up with Nationwide race Friday and took home the Cup race on Saturday night," Busch said. "It's something that's never been done in the 16 years there have been three series and it hasn't been done in the four years since I did it. There could be a chance for me to do it again."