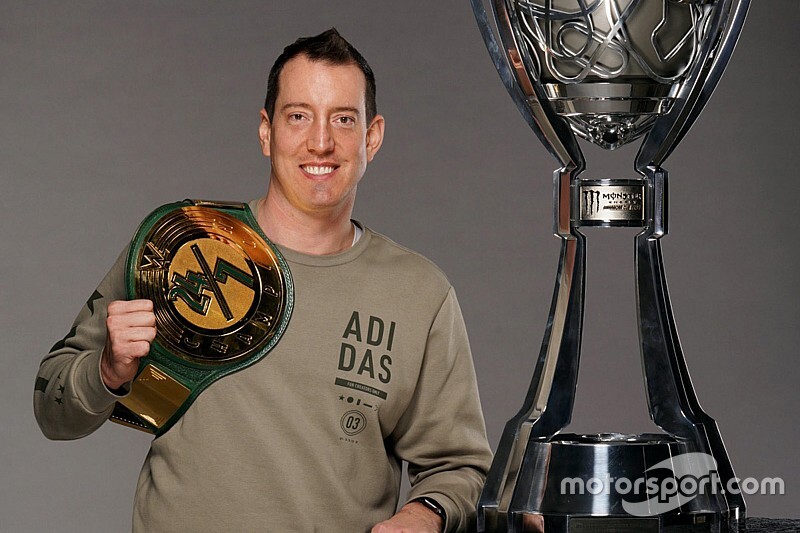 The annual NASCAR Cup Series awards show and its surrounding activities moved to Nashville this year from Las Vegas and WWE hosted its live “Raw” show in town on Monday night, three days before the Cup Series event.

Sitting on the front row were Busch, his wife, Samantha, and the couple’s 4-year-old son, Brexton.

During a segment when wrestler R-Truth (Ron Killings of Charlotte, N.C.) was celebrating with his 24/7 championship with Busch at ringside, Busch rolled up R-Truth on the arena floor in front of special guest referee and former NASCAR driver Michael Waltrip, who counted the one-two-three.

The “win” gave Busch the 24/7 championship – a title which can be defended 24 hours a day, seven days a week so long as there is a referee present.

Later in the show while Busch was celebrating his victory backstage, R-Truth showed up with a referee of his own, pinning Busch by his dressing room and reclaimed the title.

While R-Truth never officially lost the title again Monday night, he did briefly lose possession of it when Brexton Busch grabbed it and ran off with it.

Brexton eventually returned it to his father, who returned it to R-Truth, who agreed to take the belt and not Busch’s Cup Series championship trophy instead.

This is the second time Busch has played a role on WWE’s “Monday Night Raw.” In 2009, he and Joey Logano – both were drivers for Joe Gibbs Racing at the time – appeared as “guest hosts” on a live episode hosted in Buffalo, N.Y.

You can check out their appearance in Buffalo HERE.

Corey LaJoie to return to Go Fas Racing in 2020