KYLE BUSCH
‘Double or Nothing’

HUNTERSVILLE, N.C. – Las Vegas native Kyle Busch plays a game of “Double or Nothing” every time he straps himself into a racecar.

While double or nothing in this case doesn’t necessarily have to do with gambling, the driver of the No. 18 M&M’s Toyota for Joe Gibbs Racing (JGR) will get to show everyone what he means by double or nothing as the series head into the second non-points event of the season – Saturday night’s $1 million-to-win Sprint All-Star Race at Charlotte (N.C.) Motor Speedway. 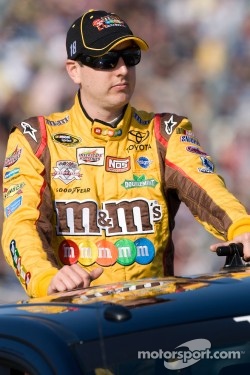 Busch first showed what he means by double or nothing in the 2009 edition of the Sprint All-Star Race. At the time, NASCAR instituted short-track-style double-file restarts for just the All-Star Race. After Busch pulled off several bold moves that injected plenty of excitement into the race that year, it prompted NASCAR to go ahead and institute the rule permanently for NASCAR’s top three series starting at Pocono (Pa.) Raceway a few weeks later.

The talented 26-year-old is widely known as one of the best at restarts in NASCAR, and he’s provided plenty of excitement for the fans ever since. An example of that came just last weekend, when Busch used the final double-file restart of the Sprint Cup race at Dover (Del.) International Speedway to pick off five cars on the first lap alone, and went all the way from 12th to finish a solid fourth.

Busch didn’t earn his spot in the year’s All-Star Race on double-file restarts, alone. He locked in his spot in this year’s All-Star event – comprised primarily of 2010 and 2011 Sprint Cup race winners, plus past All-Star Race winners and past series champions – via his three series wins in 2010 and his two wins in NASCAR’s top series thus far in 2011, tying Matt Kenseth and Kevin Harvick for the most Sprint Cup wins to date this season.

The Las Vegas native not only has earned the title of All-Star, he’s quickly become one of the dominant forces in the elite Sprint Cup Series. With his 21st career Sprint Cup win last month at Richmond (Va.) International Speedway, Busch now has 96 career wins in NASCAR’s top three divisions – Sprint Cup, Nationwide, and Camping World Truck. With the aforementioned win at Richmond, Busch is now tied for 29th on the all-time Sprint Cup wins list, where he joined Jeff Burton, Bobby Labonte, Benny Parsons and Jack Smith.

Busch was regarded as a potential star when he entered the Sprint Cup ranks full-time in 2005 as a raw 18-year-old, but he’s quickly transformed that star potential into bonafide All-Star status since joining JGR at the beginning of 2008.

A competitor who has tried to focus on racing smart during points-paying events week in and week out, Busch views Saturday’s non-points-paying All-Star Race as his annual, one-time opportunity to throw patience out the window at his own discretion.

You put on quite the show in 2009 on restarts during the All-Star Race. What do you remember about that race and some of the moves you made on restarts?

“It was quiet for a majority of that race and then, during the last 10 laps, if I would have had a car that was capable of running up front and leading the laps, I would’ve gotten to the front and been gone. Unfortunately for us, our car was way too tight in the last segment. We pumped up the air pressures and didn’t put all the fuel in the car trying to keep some nose weight in it to keep it a little bit tight. That’s what actually made a race out of it – me having a tight racecar. Yeah, the restarts were good. I could jump to the front and get out there, but I couldn’t hold those guys off. It was pretty wild with the three-wide in the middle there, at one point. To me, it really seemed like it was pretty exciting the last 10 laps, and I hope we can do the same this weekend with our M&M’s Toyota and finish up front this time around.”

What’s the difference between how you race in a points-paying race versus a non-points event like the All-Star Race?

“The All-Star Race is a different atmosphere for me, since it’s a different way of racing for everybody. It’s just that it’s a non-points race, and the pure fact you’re going after a race just for bragging rights and a million bucks. That’s what it’s all about. Our pit crew is really solid, so I hope we can earn the pole again like we did in 2008 with the combination of speed and what those guys do on pit road.”

How would you describe your driving style? Does your style fit well with the All-Star Race?

“It’s hard to describe a driving style. A lot of guys would say they’re patiently aggressive. That’s the best way to look at it. I guess that’s the way I thought I was a few years ago, even though there wasn’t a lot of patience involved. Now, there’s a lot more involved and I’ve gotten smarter. There were plenty of times I could have made moves this year at certain points of the race and I decided to back off and wait a lap and let it happen on its own. So, it’s been a lot better and I’ve thought about things a lot more. It seems to me that success is becoming a little easier when you’re patient when you need to be, but also aggressive when you need to be. In a non-points race, you just take a different attitude than you would in a points race and it makes it exciting for the fans.”

Are you ever surprised at what you’ve accomplished in such a short time during your career?

“That’s all NASCAR wins – that’s not Cup wins. In the all-time list, if you think of it that way, it’s pretty cool. It’s good. People will always tell you that they’re not Cup wins and Richard Petty’s were (all) Cup wins. Nothing to take away from Richard or anybody else who raced back in those days, but I pulled up some entry lists and some finishes and sometimes there are 12 cars that entered the race or 18 cars that entered the race. That’s not taking away from those guys because they built this sport into what it is today. They won those races and, for me, I feel like our era now has come so far from what it was that it’s tough to win here right now, too. Those guys certainly did work hard because they worked on their own stuff, drove their own stuff to the racetrack and did their own tires and all that kind of stuff. There are always differences in how hard it was to get to the track back then compared to how it is, now. You’ve got huge companies that are helping to sponsor you and doing advertising around racing and the cars are so even that’s it tough to separate yourself from everyone else.”

Do you think you’re having more fun this season?

Do you have a favorite memory of watching the All-Star Race as a fan?

“I think my favorite memory of watching as a fan growing up was the T-Rex car with Jeff (Gordon) and being a Jeff Gordon fan and watching him dominate that night and pretty much taking everybody to school. I guess that car probably took everybody to school more than he did. It was fun to be a Gordon fan that day.”