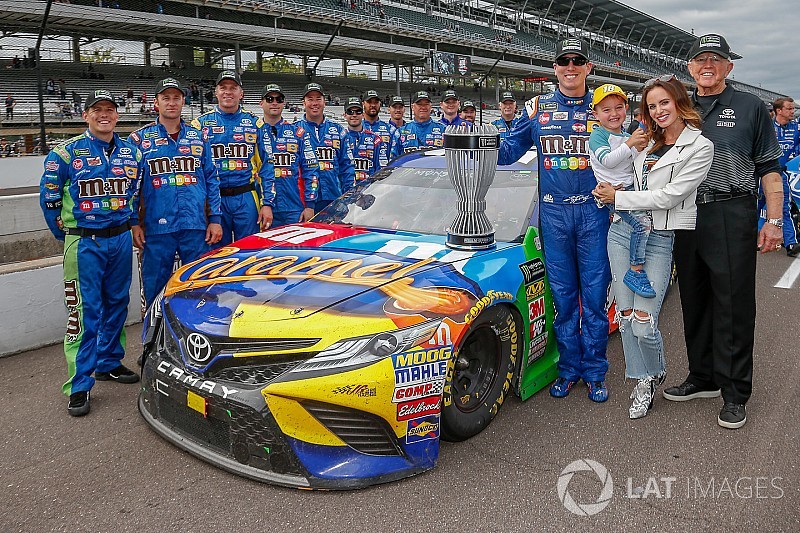 Kyle Busch won the regular season championship at Indianapolis Motor Speedway Monday, but it was far from smooth sailing for the No. 18 team in the Brickyard 400.

Busch started the race from pole position and led early without issue. However, ahead of the first of two pre-planned competition cautions, Busch attempted to pit with Kevin Harvick and encountered his first of many setbacks at IMS. He could not slow down in time and was forced to abort the stop.

Strategy never seemed to be on the side of the No. 18 team with Busch finding himself in a position where he needed to fight his way back through the pack on more than one occasion during the race.

Following the Stage 1 break and pit stops, Kyle Busch stayed out and took control of the race. But while pacing, he caught the wet grass while warming up his tires. He then radioed, “Ever since then, the steering has been tougher.”

After pitting during a Lap 67 caution from the lead, Busch would never find the front of the field again. He would later attempt to short-pit before the end of the second stage, but ended up getting a penalty for pitting too soon as the pits were closed before he reached the commitment line.

He was then forced into an unscheduled pit stop with 41 laps to go, due to a flat right rear tire.

“Man, what an ugly day," Busch said afterwards. "One of the ugliest ones we’ve had here at The Brickyard in a long, long time. That wasn’t exactly what we were hoping for or what we wanted out of this M&Ms Caramel Camry and for our team, but it’s the day we were given. We had a lot of ups and downs, mostly downs and trying to fight back all the time, but just didn’t have quite the speed we were looking for either. I wish that we could’ve been faster than what we were and being able to pass cars easier than what we were able to do.

"We just didn’t have that today. Overall, grand scheme of things I guess, pretty good day considering we get to go home with cool new hardware and also some more bonus points to get ready for Las Vegas – my hometown coming up this week – and starting our playoffs.”

Entering the playoffs on top

Busch is the No. 1 seed in the 2018 Cup Playoffs, tied with Harvick for the most bonus points at 50. He's also won six races this season, second only to Harvick's seven.

“It feels really good," he said of leading the way into the postseason. "They give away a trophy and we were able to go out and get it. Pretty cool to have our opportunity that we had because of M&Ms and Toyota and Skittles and Interstate Batteries and Joe Gibbs Racing. Everybody on this team, they work so hard all year long and to get us to where we’re at here today, it was certainly hard fought, especially today. It was ugly. It was not at all what we were hoping for or what we really wanted to see out of today and obviously had a lot of frustrations out there, but overall it’s pretty good to be in this spot with having those extra bonus points and having some new hardware to go home with us.”

Despite the in-race drama, the JGR driver did rebound for an eighth-place finish to cap off the first 26 races, but the regular season title appeared to feel a bit hollow compared to what could have been for Busch at the Brickyard.

Beleaguered Truex to “come out swinging” in Vegas after Indy DNF