Kyle Busch held off Brad Keselowski to take the win in a very eventful Stage 2 at Phoenix. 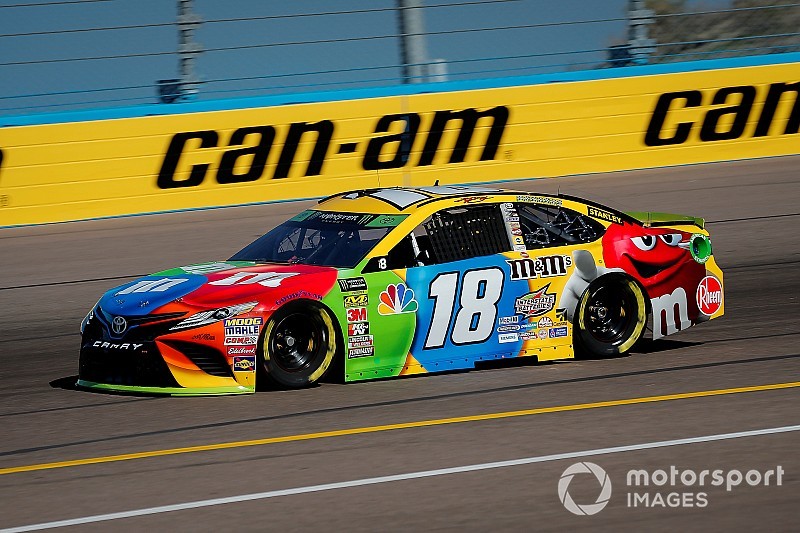 During the break between Stages 1 and 2, Elliott was the first off pit road and maintained the led on the restart on Lap 84. He was followed by Kurt Busch, Denny Hamlin and Blaney.

Harvick, who pit early before the stage break with a flat right-front tire, lined up 29th on the restart, one lap down.

Kurt Busch wasted no time on the restart and got around Elliott to take the lead for the first time before the start of Lap 85.

On Lap 92, Harvick had already made his way into the free-pass position, as the first car one lap down.

Joey Logano appeared to cut a left-rear tire and hit the wall to bring out a caution. The caution also allowed Harvick to return to the lead lap as the beneficiary of the free pass. Daniel Suarez also ran into Matt Kenseth while trying to avoid the incident.

“I was running behind (Kenseth) and I hit the brakes pretty hard,” Suarez said.

The wreck ended Logano’s day early, but with his win at Martinsville, Va., he is already locked in the Championship 4 and will race for the series title next weekend at Homestead, Fla.

Kurt Busch remained on the track and stayed in the lead on the restart on Lap 106. Elliott was second, Blaney third, Hamlin fourth and Kyle Busch fifth.

With 40 laps remaining in the second stage, Kurt Busch held a small advantage over Elliott with Keselowski up to third. Harvick had already made his way up to 17th.

On Lap 114, Keselowski got around Elliott on the inside and moved into the runner-up position.

With 30 to go in the stage, Kurt Busch held a small advantage over Keselowski with Elliott running in third. Harvick had advanced to 16th.

On Lap 133, playoff contender Clint Bowyer appeared to have a tire go down and he hit the wall hard between Turns 3 and 4, bringing his championship hopes to an end. During the pit stops, Kurt Busch was penalized one lap for passing the pace car while entering pit road.

“Pace car speed is faster than pit road speed, I don’t know what to tell you,” Busch said over his radio. “I’ve never seen anything like this before in my life.”

Truex elected to stay out and took over the lead on the restart on Lap 141. He was followed by Byron, Harvick and Johnson.

With seven to go in the stage, Kyle Busch got around Truex to take the lead for the first time in the race.

Joey Logano: “This doesn’t affect anything” after Phoenix crash