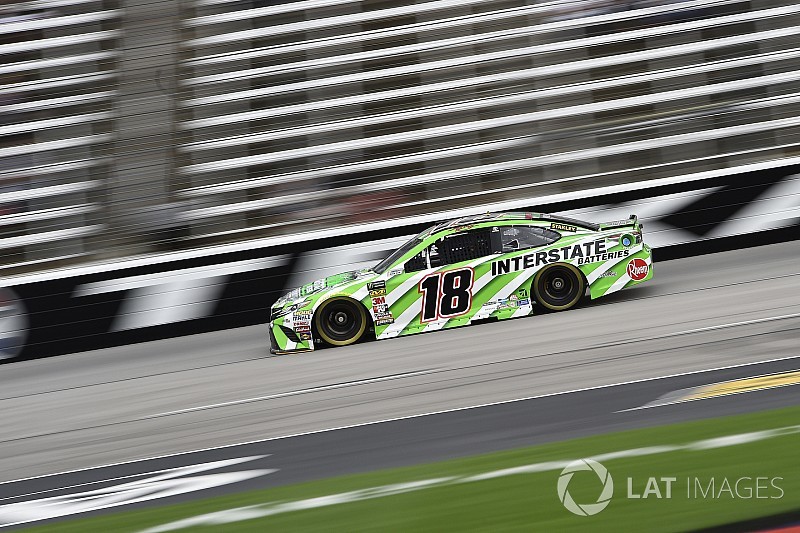 Kyle Busch held off his brother, Kurt, to claim the Stage 2 victory at Texas Motor Speedway.

Kyle passed Kurt with three of the 85 laps remaining in the stage to claim the win and the playoff point that comes with it. It’s his second stage win of the year.

During the break between Stages 1 and 2, Kyle Busch beat Kevin Harvick off pit road to take over the lead when Stage 2 went green on Lap 89. They were followed by Kurt Busch, Kyle Larson and Logano.

During the pit stops, Hamlin’s team was penalized for an uncontrolled tire – his second pit road penalty of the race already.

With 60 laps remaining in Stage 2, Kyle Busch continued to hold on to a slight lead over Harvick, followed by Kurt Busch, Logano and Larson.

On Lap 117, Harvick finally made his way around Kyle Busch and back into the lead. He almost immediately powered into almost a one-second advantage over the No. 18.

On Lap 128, Larson looked like he blew a right-front tire while running fourth and slammed into the Turn 2 wall hard to bring out a caution and bringing an abrupt end to his race.

During the pit stops, a lugnut on Harvick’s car got stuck in the jack and he lost eight positions on pit road. After being told what happened by crew chief Rodney Childers, Harvick said, “Just fix the (expletive) problems.”

Kyle Busch was first off pit road and returned to the lead when the race returned to green on Lap 135.

Just after the restart, Harvick yelled “loose wheel” over his radio and headed down pit road for a four-tire stop on Lap 137. He returned to the track on Lap 138 and one lap down in 22nd position.

On Lap 141, Blaney also complained of a loose wheel and brought his No. 12 Ford down pit road under green for a four-tire pit stop.

With 25 laps remaining in the stage, Kurt Busch had moved into the top spot and held about a half-a-second lead over his brother, Kyle. They were followed by Logano, Jones and Bowyer.

Truex and Larson taken out early due to tire failures