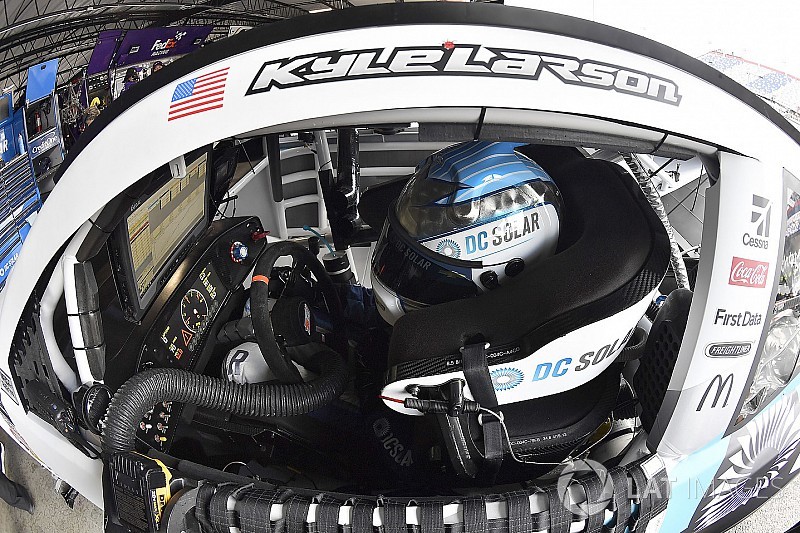 Kyle Larson cruised to a more than five-second win over Erik Jones to claim the Stage 1 victory at Darlington (S.C.) Raceway.

Larson led all by the first 11 laps of the 100-lap segment Sunday night. He also made comment in the closing laps of the stage with Austin Dillon, who was fighting to stay on the lead lap.

Hamlin, the pole-winner, led the first 11 laps of the race until Larson got moved around him in Turns 3 and 4 to take the lead on Lap 12.

Just 25 laps into the race, Larson had already moved out to a more than 3-second lead over Hamlin with Truex close behind in third.

On Lap 30, Alex Bowman brought his No. 88 Chevrolet down pit road under green for what appeared to be a flat right-rear tire. He returned to the track in 36th and two laps off the pace.

Truex finally got around Hamlin to move into the runner-up position on Lap 37 and then two laps later, Jones passed Truex to take the second spot.

With 60 laps left in the first stage, Larson maintained a nearly 6-second lead over Jones, followed by Truex, Logano and Hamlin.

A round of green-flag pit stops got underway on Lap 45 and by the time the cycle of stops was completed on Lap 51, Larson returned to the top spot, followed by Truex and Jones.

With 40 laps remaining in the stage, Larson’s lead remained just over 4 seconds over Truex with Jones continuing in third. Logano ran fourth and Keselowski had moved into fifth.

On Lap 64, Jimmie Johnson was forced to pit under green for a loose wheel. While making his stop, Johnson was penalized for a commitment line violation and to make a pass-through penalty. When he returned to the track, he was 34th and three laps down.

On Lap 67, Jones got around Truex and moved back into the second position.

Bowman made another green-flag pit stop on Lap 72 to get four new tires.

With 10 laps left in the stage, Larson still held a more than 5-second lead over Jones, with Truex in third followed by Logano and Keselowski.

The start of the race was delayed by more 50 minutes as lightning was spotted several times close to the track.

Four cars – those of Jamie McMurray, Joey Gase, Johnson and Jeffrey Earnhardt – had to start the race from the rear of the field. McMurray and Gase had made engine changes and Johnson and Earnhardt had unapproved adjustments to their cars.