Kyle Larson is the real deal

A look at Kyle Larson, who flexed his muscle this past weekend in California, winning the Nationwide race and coming runner up in the Sprint Cup race.

If there was any doubt whatsoever that Chip Ganassi can spot talent, it was obliterated last weekend with the emergence of Kyle Larson. The NASCAR Sprint Cup Series rookie, who is also racing in the second-tier Nationwide series this year, performed beyond his years on Saturday and Sunday at Auto Club Speedway in Fontana, CA.

On Saturday he beat other Cup regulars, including Kyle Busch and Kevin Harvick to the checkered flags in the Nationwide race, to take his first win in that series. On Sunday the young Californian hit his marks in the Cup series, coming second to the checkered flags just behind winner Kyle “Rowdy” Busch and in front of Kurt Busch. Call him the meat in the Shrub sandwich.

Through it all the 21-year-old from Sacramento displayed racing wisdom beyond his years, just as he did last February when he was caught in a final lap crash that sent his car sprawling against the Daytona International Speedway fence. At that time Larson was concerned for others around him, more than he was for his own safety as he realized he had survived (even if the car and fence didn’t). 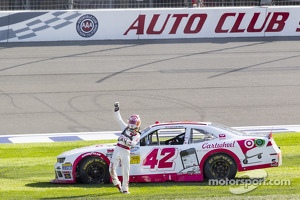 Larson performed well in Nationwide in 2013, although he didn’t set the world on fire. That’s fine. He was learning his craft after winning Rookie of the year in the 2012 NASCAR K&N Pro Series East. That year he also won the Turkey Night Midget Grand Prix at Perris, CA’s dirt track. Larson won rookie honors in Nationwide last year to cap a grand year.

When Ganassi set Juan Pablo Montoya loose last summer, one had to wonder who would be taking that seat. Turned out to be Larson and Ganassi hasn’t looked this smart since he hired Montoya back in 1999. (The hiring of Alessandro Zanardi to race alongside Jimmy Vasser in 1996’s CART championship wasn’t too shabby either).

The kid’s got car control as magical as Montoya in his early prime and he’s got maturity well beyond the scope of his years. He handles the media almost as well as he keeps his No. 42 Target Chevrolet SS planted on a racetrack. it seems that sometimes you forget he’s there, but when the end of the race comes, there’s Kyle Larson making his way to the front of the pack. Sweet.

It’s nice to have someone new and exciting to root for in NASCAR’s Cup series. Larson, who comes from Japanese-American background and whose grandparents were kept in isolation because of their background during WWII, grew up to the melody of race engines. He began racing karts at seven and spent his teen years in midget and sprint cars. 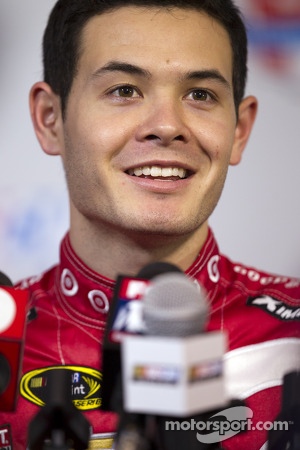 Larson’s star began to shine brightly when he won the 2011 4-Crown Nationals at Tony Stewart’s Eldora Speedway, taking all three disciples and becoming only the second driver in history to accomplish that feat. He’s kept his hand in on the dirt and is still considered one of the best in that type of racing, which teaches an awful lot about car control. Just ask Cup drivers like Jeff Gordon, Stewart, Kasey Kahne and even Jimmie Johnson, who raced off-road dirt trucks before he came to NASCAR.

While Kyle Larson has drawn comparisons to Gordon and others he emulated as a child, there should be none of that. Consider him the new Kyle Larson - that’s it. This kid has the backing, the brains and the talent to do as well as those he’s always wanted to emulate. And perhaps they should emulate him?