Kyle Larson on Harvick wreck: "We were both racing really hard" 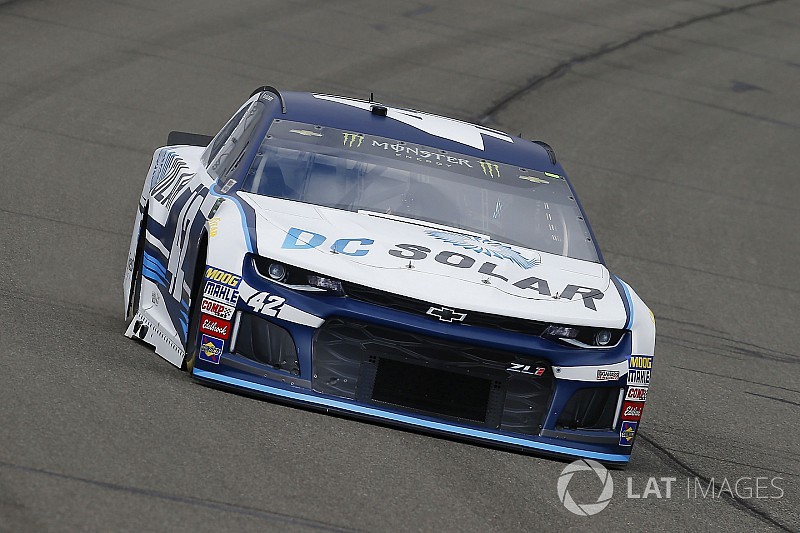 Kyle Larson overcame an early run-in with Kevin Harvick to earn his best finish so far this season.

Larson has grown frustrated at times in recent seasons with his second-place finishes but considering all the circumstances he and his No. 42 Chip Ganassi Racing team experienced in Sunday’s Auto Club 400, it may have been the best they could get.

Harvick, who came in having won the last three Monster Energy NASCAR Cup Series races, was fast again all weekend in practice but wrecked with Larson as both raced for position on Lap 38 of 200.

Harvick quickly admitted fault over his team radio but Larson dismissed the idea the duo were racing “too hard” that early in the race.

“We were racing really hard. I was better than him in (Turns) 3 and 4 and he was better in (Turns) 1 and 2. I side-drafted him down the frontstretch and he side-drafted me down the backstretch. I don’t know if he was just coming down to side-draft me or what, but we made contact and he spun his car to the right,” Larson said after the race.

“I was trying everything I could do to get by him. He just got into my right-rear. I was having a lot of fun those few laps. I could tell he was trying to hold me off and race me really hard. He was better than I was for sure on the longer-run.

“I think he didn’t want to get stuck behind me if I was to pass him. He would have likely have been better than me in about 10 laps. We were both racing really hard.”

Larson experienced some damage to his No. 42 Chevrolet from the incident and required a pit stop for repairs. Later in the race, following a pit stop, Larson had brake duct come off his right-front caliper that got stuck between the wheel and the hub.

“We had lot of weird stuff happen where we would have to restart in the back and drive back forward and we could always get to about third or fourth,” Larson said. “It was a really good day.

After the final round of green-flag pit stops, Larson was able to move into second place with about 18 laps remaining. He gained some ground on Truex, but eventually fell back again and finished more than 11 seconds back at the finish.

“The 78 (Truex) was just checked-out on that last run. I was hoping he and (Kyle Busch) would get racing there and maybe wear their stuff out,” Larson said. “We were just really tight after our (last) green-flag stop.

“I just couldn’t get going really fast at the beginning (of the run) and were still too tight at the end.”

The finish was Larson’s second top-five in the past three races and he moved to seventh in the series standings.

Asked if he felt his team was getting closer to the level of Truex and Harvick, Larson said, “I feel like we’re getting closer. The 4 (Harvick) was probably still the best car but we were probably third or fourth-best.

“We got a second, which is good, but we need to be a little bit better.”