Kyle Larson faces a must-win situation heading into the elimination race at Kansas Speedway following an L1 penalty issued by NASCAR on Wednesday. 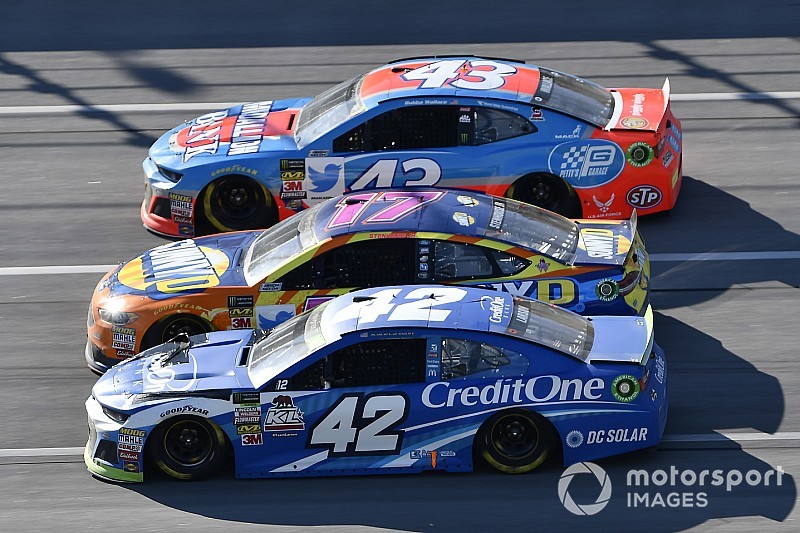 Larson salvaged an 11th-place finish at Talladega Superspeedway despite a difficult weekend, but that seems to be all for naught now.

NASCAR has issued a substantial penalty to the No. 42 Chip Ganassi Racing team, citing Section 10.9.9.d of the rule book, which covers the damaged vehicle policy and mechanical repairs. "Damaged vehicle repair, regardless of how the damage occurred, is permitted to have original body parts removed or reattached in their original location with fasteners and/or tape only," it reads.

Larson went spinning on the backstretch during the 105th lap of the race, forcing the team to make some repairs to his Chevrolet Camaro.

As a result of the penalty, Larson's crew chief Chad Johnston has been fined $25,000 while car chief David Bryant has been suspended for one points event. But most importantly, the driver and owner have been docked 10 championship points.

Larson was already in the elimination zone heading into Kansas, but the loss of another ten points puts him in a dire situation where winning will likely be his only chance of advancing into the third round of the playoffs. He is now 36 points below the cut line.

“After reviewing the penalty, the rule and the procedure that we used during the race in Talladega, we feel strongly that we did nothing wrong. Subsequently, we have decided to appeal the penalty. Despite going through the appeal process, we will do everything in our power to keep our team focused on the race this weekend in Kansas and the balance of the season.”

NASCAR Roundtable: Who will be eliminated at Kansas?