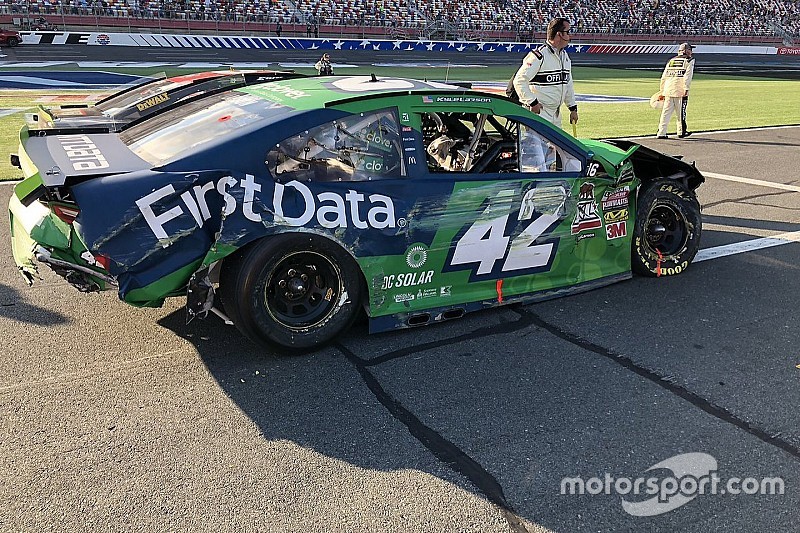 It appeared Kyle Larson's 2018 playoffs had come to screeching halt in Turn 1 on a late-race restart at the Charlotte Motor Speedway Roval.

On a restart with just six laps to go in the race, race leader Brad Keselowski blew the first corner and plowed into the tire barrier. Several cars followed suit and Larson was caught up in the melee, sustaining severe damage to the right front and right side of his No. 42 machine.

“I knew that it was going to be tough to turn getting into (Turn) 1. I didn’t know that all of us were going to go in there and not be able to turn at all. I was going to struggle to make the corner and then the No. 2 (Keselowski), he just went head on into the wall. I was hoping I would have enough room to squeak by him, but I got into him and destroyed the right-front of our car."

Larson also lamented the fact that the race didn't go green to the finish, as he thought he was in a prime position to capture the win for Chip Ganassi Racing.

"We had a great Clover by First Data Chevy today, led a bunch of laps, would have liked it to have played out there and just run to the end there.  I was saving fuel and it sounded like the No. 2 was really short on fuel. I felt like I could have won, but the No. 17 (Ricky Stenhouse, Jr.) ended up spinning out and the caution came out. Obviously, we all went down on that restart and couldn’t turn."

Refusing to give in

The crew made what repairs they could to his Chevrolet Camaro and sent Larson back out for the final three-lap run to the finish. He complained on the radio that it was difficult to turn the car and he was quite slow as he limped around the circuit.

On the final lap, it appeared Aric Almirola had passed enough cars to save himself from elimination, bumping Larson out. That is when chaos ensued on the frontstretch as race leaders Martin Truex Jr. and Jimmie Johnson collided as they battled for the race win, spinning out of control.

Behind them, Jeffrey Earnhardt got turned off the nose of Daniel Hemric, sending him into the outside wall. Upon hearing of the carnage ahead, Larson pushed hard and actually blew his right front tire, bouncing off the walls through oval Turns 3 and 4, as well as the frontstretch wall just before the finish line as he struggled to steer his wounded car. Just ahead, Earnhardt sat, unable to re-fire his No. 96 machine.

With that pass by Larson and Johnson's spin, they, along with Almirola, found themselves in a three-way tie for the final transfer spot. The tiebreaker is decided by the best finish in this round, which ultimately went to Larson and Almirola with Johnson as the odd man out.

It was a miraculous recovery for a car that couldn't even steer properly.

“I knew I was screwed. And then they said they were all crashing and it had to have been 45 seconds by the time I got back over there. I ran really hard through (Turns) 1 and 2. We had a lot of right-front damage and we kind of knew the right front would blow if I ran hard. But, I ran hard through (Turns) 3 and 4 and blew a right front and got into the fence. I could see the No. 96 (Earnhardt) and I knew I needed that point to get to the tie-breaker and hit the wall again.

"Thankfully, we got the tie-breaker. At the same time, I’m happy to make it to the next round. I’m disappointed we didn’t get the win today. I felt like I had the fastest car."

Disappointment aside, Larson will carry on to fight another day and goes on to be one of 12 remaining drivers who's 2018 title hopes are still alive.