Kyle Larson: 'I've been a step behind' Harvick, Busch and Truex 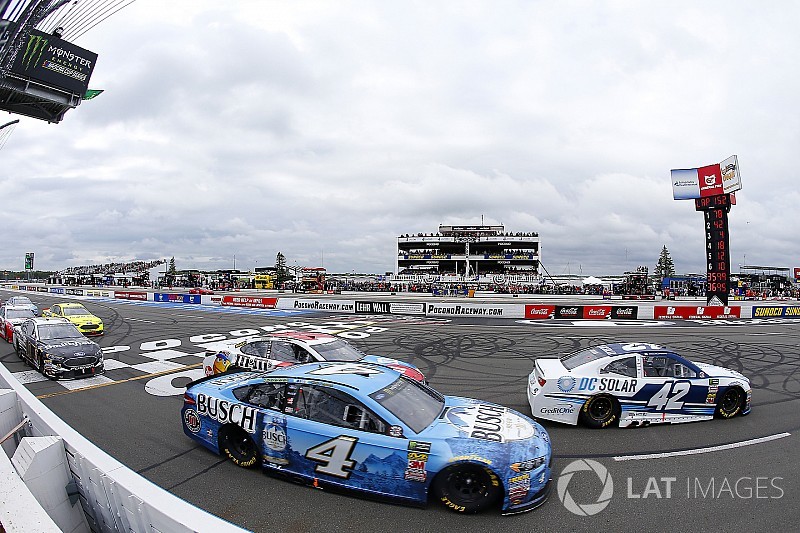 Kyle Larson captured his third runner-up finish of the 2018 season at Pocono Raceway on Sunday.

Larson was among those who stayed out during a late caution in the 400 mile race, holding off a charging Kyle Busch in order to finish second to Martin Truex Jr.

The Chip Ganassi Racing driver was never much of a factor up front and failed to lead a lap, but taking advantage of clean air late in the race and securing prime track position helped him to match his best result of the season.

"I ran probably sixth or seventh all day long and finished second," said Larson. "Was happy about that because I felt like obviously we were at a little bit of a disadvantage on tires there, but the track position overcame that. But I felt like if I didn't have a good restart on any one of those, I would have fell back outside the top five from those guys on fresher tires.  Happy we finished second but needed a lot more to kind of compete with the three guys that ran up front all day."

Despite the strong showing and the improvements made by all the Chevrolet teams, Larson still feels they are a full step behind the leading trio of Truex, Busch and Kevin Harvick.

"I felt like my car today was kind of as good as it's been all year. I feel like the Hendrick guys have definitely gotten better, as well as RCR guys.  But I feel like I've kind of just been a step behind the 18, the 78 and the 4.

"I definitely felt like the 4 had the most power down the straightaways today, the little bit I was in front of him there at the end.  I felt like even when I get a good exit off of 3, he would close on me a lot, compared to the 18 and the 78 a little bit, but the 4 was definitely really fast.

"But we've got to just continue to work hard and, yeah, try and get our cars a little bit better."

Larson leaves Pocono ninth in the championship standings, but he now heads to Michigan, where three of his five Cup wins to date have come.

NASCAR could place more limits on Cup drivers in other series