Chip Ganassi Racing’s Kyle Larson salvaged an 11th-place Monster Energy NASCAR Cup Series finish at Talladega on Sunday, but was unable to hide his frustration as he hit out at his team’s lack of pace at restrictor plate tracks. 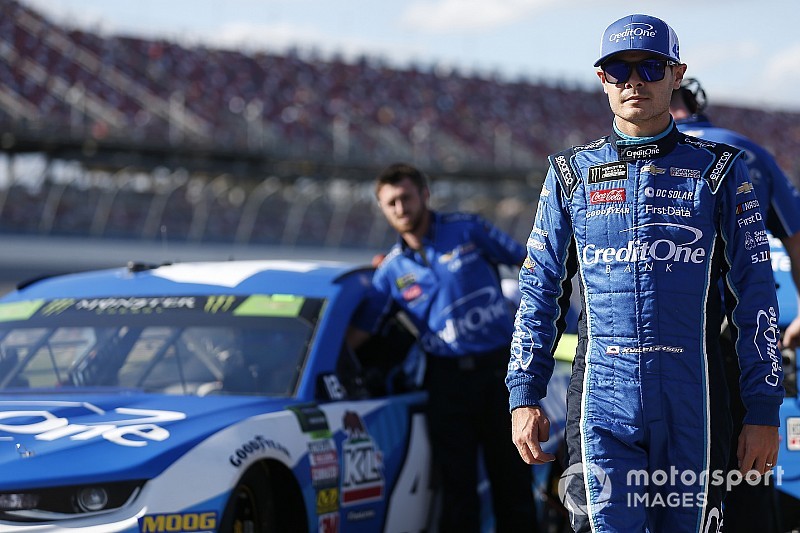 Larson recovered from a tire blowout that sent him spinning on Lap 103, although his CGR crew managed to fix severe damage to the right-front fender.

The 26-year-old rebounded in the incident-packed closing stages to finish just outside the top 10, but remains down in 11th place in the standings and 26 points away from the cut line to progress to the final eight.

Larson admits he’s now in a must-win situation in next weekend’s race at Kansas Speedway.

“We just had a terrible race car and were really slow all weekend,” said Larson. “So it’s pretty disappointing – embarrassing at times – especially in practice and qualifying.

“We were able to get an 11th, so I mean, salvaged a decent day but we’re still in a position where we need to win next week. But 11th doesn’t matter, even second wouldn’t matter, we just need to have a good weekend in Kansas, it’s always been a good track for us. That’s promising, to go to a track where we’ve ran well at, led a lot of laps and challenged for wins.

“Hopefully we’ll have a good race and do something special.”

Of his team’s superspeedway woes, Larson hit out: “You’d like to bury this [result] but at the same time, it’d be nice to invest some money into our superspeedway cars. Money and time.

“We focus so much on mile-and-a-half stuff, which is obviously important, but these plate races mean a lot, there’s a lot of points to be made at Daytona and Talladega, and I feel like we never really tried to improve as an organization really since I’ve been at CGR.”

Harvick: SHR's plan was "all about survive and advance"

Reigning champ Truex among those in playoff trouble