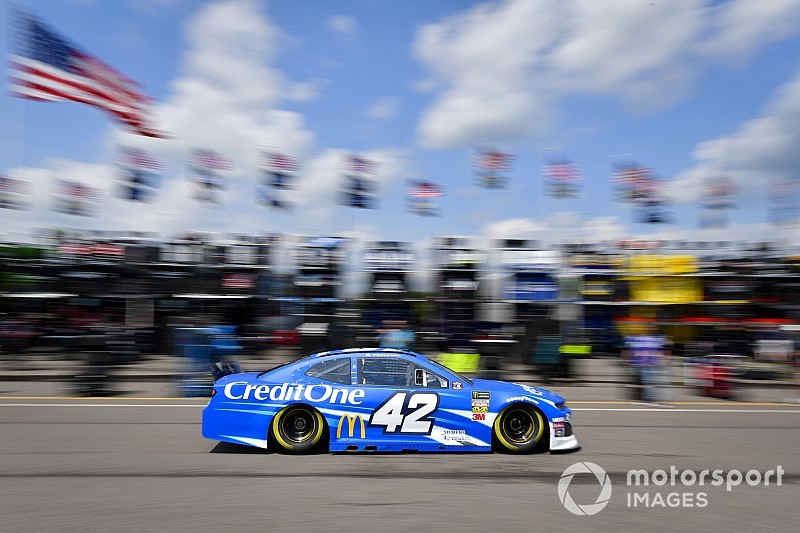 Kyle Larson remained in command of the Pocono 500 on Sunday, earning the Stage 2 victory.

While many drivers elected to pit before the stage break, Larson stayed on the track and completed a sweep of the stage wins in the race.

Following the break between Stages 1 and 2, Byron was the first off pit road among those who pit and Keselowski stayed out to inherit the lead.

Both Suarez and Ricky Stenhouse Jr. were penalized for speeding on pit road and both had to restart the race from the rear of the field.

The race went green in Stage 2 on Lap 56. Kyle Busch took Keselowski and Martin Truex Jr. three wide in Turn 2 and came out the leader for the first time in the race.

On Lap 58, Matt DiDenedetto spun off Turn 2 to bring out a caution. He had started the race from the rear of the field due to an engine change.

Keselowski was among those who elected to pit under the caution as well as Larson, Byron, Ryan Blaney, Suarez and several others.

On the restart on Lap 57, Kyle Busch continued to lead with Hamlin powering to the second position and Chase Elliott moving into third.

Matt Tifft clipped the apron and spun off Turn 2, which brought out another caution. The race returned to green on Lap 65 with Kyle Busch still out front and Clint Bowyer moved into the runner-up position.

On Lap 69, a caution was displayed for debris on the track after Corey LaJoie hit the wall exiting Turn 2. Several lead-lap cars decided to pit under the caution, including Truex. The race returned to green on Lap 73 with Kyle Busch out front. By Turn 2, Bowyer had powered to the top spot for the first time in the race.

With 26 laps left in the second stage, Kyle Busch passed Bowyer on the outside off Turn 3 to reclaim the lead. Bowyer dropped to second and Kevin Harvick was in third.

Ricky Stenhouse Jr. was forced to pit under green on Lap 79 and cutting down a right-rear tire and fell a lap down. With 20 laps remaining in the second stage, Kyle Busch had moved out to a more than 2 second lead over Bowyer. Harvick was third, Elliott fourth and Denny Hamlin fifth.

After 90 laps, Kyle Busch’s lead over Bowyer had grown to 6 seconds. Harvick was in third and closing on Bowyer while Elliott ran fourth and Hamlin fifth. Several drivers elected to pit before the end of the stage break and they began coming down with nine laps remaining in the stage. Truex was among those who headed to pit road but apparently his No. 19 Toyota had an engine failure and he was pushed to the garage.

Kyle Busch elected to head to pit road with five laps to go, giving up the lead. Harvick and Blaney also pit at that time as Elliott moved into the lead. Larson returned to the point with four to go when Elliott elected to pit.

Kyle Busch earns fourth win of the season at Pocono