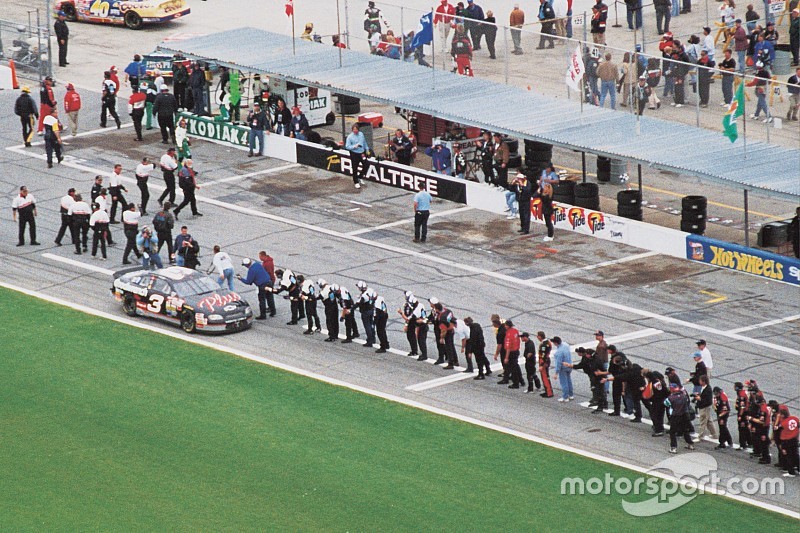 Larry McReynolds can’t believe it’s been 20 years since Dale Earnhardt won his one and only Daytona 500.

McReynolds, now an analyst for FOX Sports, was starting his second season with the seven-time champion, who had won everything at Daytona International Speedway—except for the Great American Race.

Though Earnhardt had just endured his first winless season in 15 years in 1997, McReynolds says morale on the No. 3 Chevrolet team had never been better entering 1998 Speedweeks at Daytona.

“The confidence that he had, that I had, that the race team had in what we were doing that week, it was almost like we couldn’t do anything wrong,” McReynolds told motorsport.com. “The car was just fast the entire time. It drove good. The slicker the track had got as the week went on, it just seemed to get better.

“You were almost starting to wonder, ‘Is something going to go wrong?’ And it did, with the engine in final practice. We made a decision to put another race engine in race morning, which was a little scary. But it was evident to me, from the drop of the green flag that the only team that could beat us was if we beat ourselves.”

There was no one better at Daytona than Dale Earnhardt. He holds the record for most victories in the Clash with six and qualifying race wins with 12. His winning percentage at Daytona in what is now the Xinfity Series was 53.8-percent after scoring seven victories in 13 starts.

Earnhardt had two Cup wins in the July race and had been in contention for the 500 many times before. In his 39 starts on the 2.5-mile track before finally winning the Harley J. Earl trophy, Earnhardt had amassed 19 top fives, 29 top 10s and led 1,103 laps. In 19 previous attempts in the 500, he scored 10 top fives and 14 top 10s, including four second-place finishes prior to his breakthrough win.

McReynolds’ debut as Earnhardt’s crew chief in 1997 did not end well at Daytona. After leading 48 laps, the No. 3 Chevrolet was collected in a wreck with Dale Jarrett, Ernie Irvan and Terry Labonte. Within moments, Earnhardt went from the front of the pack to 31st. That made the veteran strategist skeptical in the closing laps of the 1998 Daytona 500.

“If I go back to my first race with him in ’97 in the 500, we had a very up and down day but somehow we were leading with 20 to go,” McReynolds said. “I looked at (team owner) Richard (Childress) and said, ‘What do you think?’ He replied, ‘I’ve been here way too many times before.’

“With about 11 to go I knew what he was talking about, because we were rolling down the backstretch. So I guess, until I saw that car headed for the checkered flag I was not even going to let my heart rate get up. The caution came coming to the white flag but everyone was starting to go crazy and I was like, ‘Hey, we’ve got to run this last lap. We can’t just stop.’ I was trying to make sure that Dale knew that. And, hell, he about ran that last lap as fast as any lap he ran all day long.”

John Andretti and Lake Speed spun on the backstretch as Earnhardt remained at the point for his 107th lap led. After taking the checkered flag and marking his territory on the front stretch, Earnhardt was greeted by a receiving line of his peers stretched out along pit road.

“We were pitted fairly far down pit road, so I didn’t even know that was happening,” McReynolds said. “Somebody told me and then I saw highlights of it. But the coolest thing is he did the burnout. I tried to get him to do a Polish victory lap for the fans on the back stretch. But he said, ‘No. I’ve got a plan.’ So, he wanted to do that burnout. There was no way he planned it, but it did look like the No. 3.

“We went up to Bill France Jr.’s suite or the UnoCal suite. We looked down and the fans could see us up there and the laid down with their bodies on top of the “3”.

Unlike Earnhardt and Childress, McReynolds had won NASCAR’s biggest race before. McReynolds was the crew chief for his late friend Davey Allison’s 1992 Daytona 500 victory. Despite the chaos going on around him, McReynolds was intent on savoring the experience.

“I remember like it was yesterday,” McReynolds said. “Things had settled down in Victory Lane and I kind of took a step back. I wanted to embrace the moment and to watch Dale and Teresa and Richard and Judy Childress. How many years had they been trying? Watching them, what it meant to them, it was almost like watching your kids wake up and open their presents on Christmas morning. It was very special.”

Only one Dale Earnhardt

While McReynolds has seen his share of brilliant restrictor plate racers, he knows there will only be on Dale Earnhardt.

“There have been some good ones. Harvick is good. Kurt Busch is good. It’s hard to believe that he’s only won one restrictor-plate points race,” McReynolds said. “But it just didn’t matter if it was the Xfinity car, the IROC car, the Cup car. No, there’s not another Dale.

“Obviously, he couldn’t see the air like people say he could. We know that’s not possible. But I swear I know he could feel it.”

It's a season of change in NASCAR, it's just not apparent (yet)