Kyle Larson hasn’t driven the updated Chevrolet Camaro ZL1 1LE in the NASCAR Cup Series yet but he got an up-close look at it on Thursday. 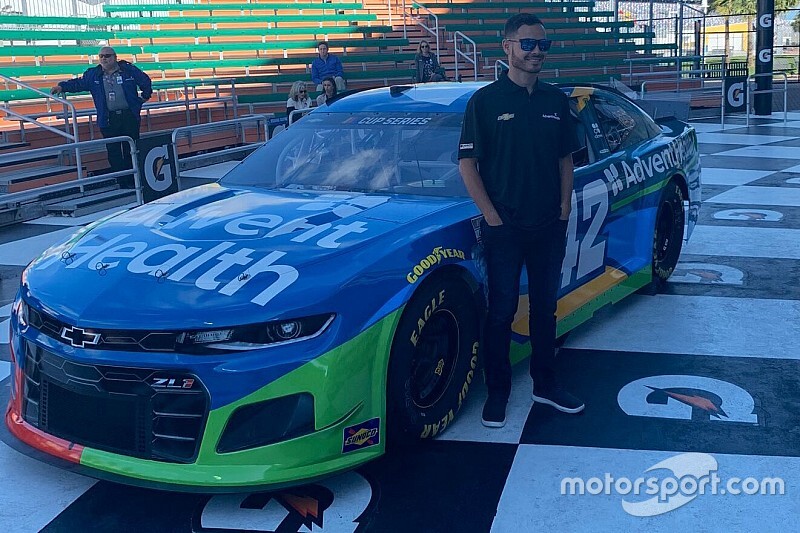 Larson participated in a news conference in Victory Lane at Daytona International Speedway in which it was announced he and Ross Chastain would each drive two Cup races this season with sponsorship from AdventHealth.

A car adorned with the sponsorship colors was brought in for the announcement and it was one of Ganassi’s updated Chevys.

The car looks similar to what has been run the last two seasons except the nose of the car is much more rounded. The Chevy ZL1 had far more distinctively pointed nose – a feature which seemed to give the Chevys difficulty when it came to bump-drafting on the superspeedways.

“We don’t have any track time with (the new Chevy) but everything I’ve heard about it at the shop, it’s better than what we had. I’m sure there will be some growing pains throughout the early part of the season,” Larson said.

“Hopefully we don’t (have any) but I’m not going to get upset if there is because we do have a new body style and there will be things we have to learn on the fly. Everybody seems to be pretty confident about it, so that makes me excited.”

Larson, 27, snapped his career-long 75-race winless streak in the Cup series last October with his victory at Dover, Del. While his 2019 season got off to a slow start he ended up sixth in the final standings.

While he has continued to race in the offseason in New Zealand and will compete in the upcoming Chili Bowl, he said was looking to expand on his NASCAR success in 2020.

“I’m excited about getting the NASCAR season started back up. I felt like just before the midpoint of last season we got really good – Kurt (Busch) and I both,” he said. “There was probably a month straight where I felt either Kurt or I had the fastest car each week.

“We had a good run in the playoffs and I finished sixth in points. He had some bad luck throughout his playoffs but he had a good season overall.”

NASCAR continues to tinker with a possible change in aero rules at short tracks but with most of the rules remaining in place for a second consecutive season, Larson believes the Ganassi organization will be in a good position to kick off the year.

“I think with the rules not changing, it helps every team really but just from where we started the 2019 season and where we ended, I felt we made the improvement out of all the teams. I think we’re in a good spot to start even with the new body style,” he said.

“You normally don’t know what to expect until you get out there but I’m looking forward to getting out there because all of our expectations are much higher going into this season.”