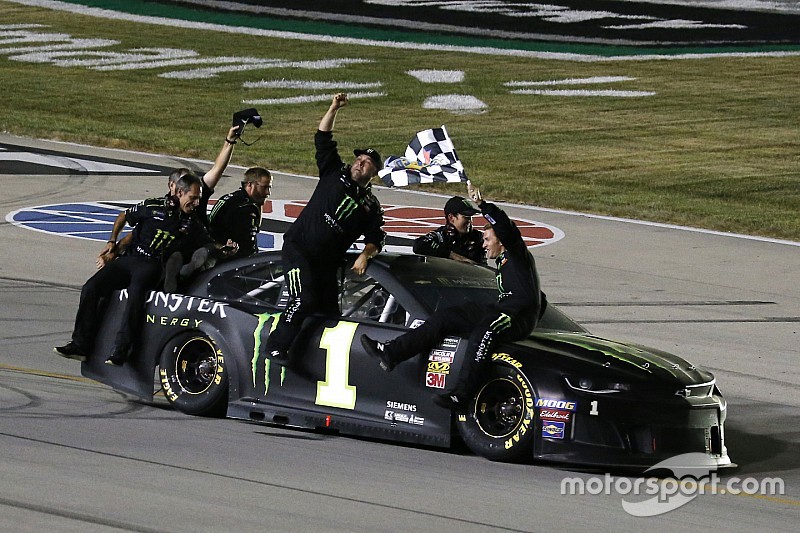 Kyle Larson remains winless in the NASCAR Cup Series this season but he did play a significant role in his teammate’s victory at Kentucky.

Larson flew under the radar most of Saturday night’s Quaker State 400, only moving into the top-10 late in the race.

When the race went into overtime, Larson lined up sixth, while his Chip Ganassi Racing teammate, Kurt Busch, was fourth, directly in front of him.

While Kyle Busch quickly worked his way past then-leader Joey Logano, Larson gave Kurt a shove, helping to propel him into a battle for the lead with Kyle.

“I was going to be committed to Kurt’s back bumper no matter how much of a run I had because I knew I couldn’t get to the lead from the third row,” said Larson, who ended up fourth, said after the race.

“So, if I could help a teammate out, I was happy with that.”

Kurt finally got side-by-side with Kyle entering the final lap and the two banged fenders before Kurt was able to come away with the lead off Turn 4 and claim the victory.

“I’m happy for Kurt, (crew chief) Matt McCall and everybody on the No. 1 team,” Larson said. “They have been really strong all year long. They should have won last week (Daytona), so it’s nice for them to get some redemption today.”

The race was the first at Kentucky with the Cup series’ new aero package. The finish was easily the most exciting since the track first began hosting Cup races in 2014.

“I thought the race for the lead there was really good from what I could see. It was good, maybe a little better than your normal Kentucky,” Larson said.

Larson has now earned two top-five finishes in the past three races and has built a decent margin in the race for a playoff berth. He is currently 14th in the standings with seven races remaining before the 16-driver playoff field is set.

Kurt Busch is now locked in thanks to his victory at Kentucky.

Third at Kentucky puts Erik Jones back into playoff contention