Money aside, Kyle Larson is "all about trophies and big wins" 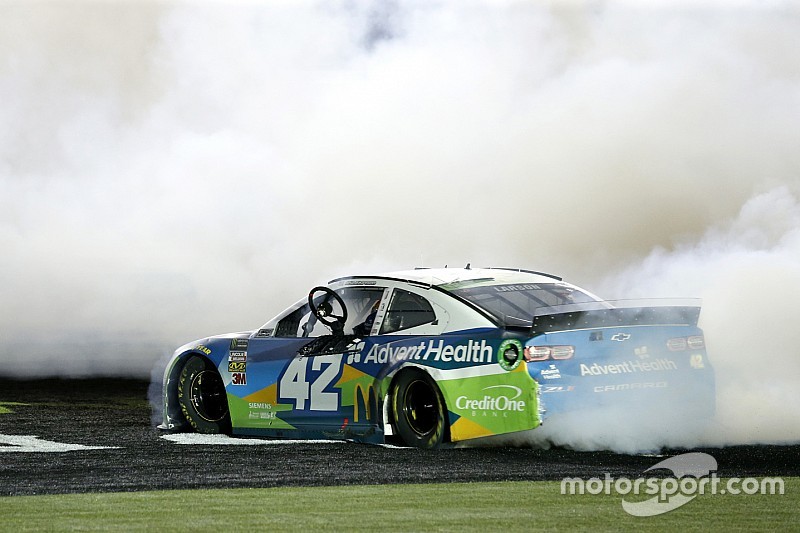 For Kyle Larson, the most important part of his victory in Saturday night’s NASCAR All-Star Race was that he ended up in Victory Lane.

Sure, a $1 million prize goes to the driver who wins the event, but Kyle Larson hasn’t visited Victory Lane in Cup Series competition since Sept. 9, 2017 at Richmond, Va.

While the All-Star win doesn’t count as an “official” victory, simply being able to put together everything needed to secure a win was a rewarded in an off itself for Larson this season.

“A million dollars is cool, but just winning is more cool than a million bucks to me,” Larson said after the victory at Charlotte Motor Speedway. “Just winning a big race, a prestigious event means more to me than the money.

“I’m all about trophies and big wins.”

They’ve been hard to come by recently for Larson and his No. 42 Chip Ganassi Racing team.

This season has been particularly difficult as Larson as wrecked out of three of the first 12 races and at one point dropped to 21st in the series standings.

There have been encouraging signs of late, though. He finished third at Dover, Del., two weeks ago (his best finish of the season) and was eighth last week at Kansas. He’s now 15th in the standings heading into next weekend’s Coca-Cola 600.

Shaking off the bad luck

Not to mention, Larson wasn’t even guaranteed an appearance in the All-Star Race main event. He raced in his way in, by winning one of the three stages of the preliminary Monster Energy Open (only the second driver to do so in the history of the event).

“With the string of DNFs that I had and bad finishes (this season), that’s what was more frustrating because I knew we were putting ourselves in a bad spot to make it to the playoffs,” he said.

“You have to be extremely consistent and just take what you can get from now on, where you can’t be as aggressive as you could be if you had a fast car and were consistently running in the top-five and stuff like that. I feel like Kansas kind of showed it last week.

“I feel like I’ve been like a seventh- or eighth- to kind of 12th-place car all season, but I haven’t got to show for it and seventh to 12th isn’t that great. A week ago or a few days ago I would say we can’t win a race like that, but we proved (Saturday night) that we could.”

Both Larson and his crew chief, Chad Johnston, said the All-Star Race victory provided a feeling of “relief.”

“We had a couple good years there where we won a lot of races, and last year we got a lot of second-place finishes and were in contention to win, just couldn’t close it off,” Johnston said.

“Any win is a big win. Obviously this weekend is a little bit different because it’s not points racing, but still, everybody is laying everything out on the line because it's not a points race and you’re racing for a million dollars.”

The biggest question for Larson and his team this week will be whether they can continue their momentum in solidifying a playoff spot with another strong performance in the Cup series’ longest event of the year.

“We’ve just got to continue to keep working hard and learn what we can, making our cars better and faster and more grip, more speed, everything,” Larson said.

Bubba Wallace: “I haven’t had this much fun in a long time”