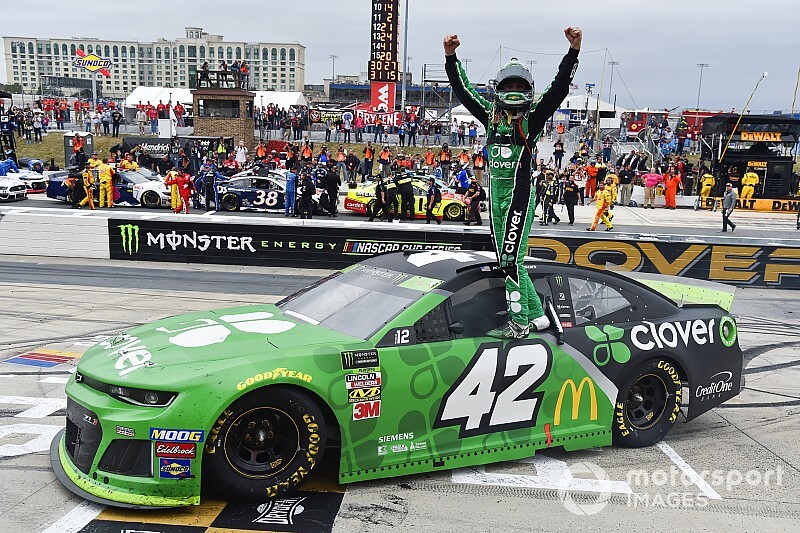 Larson’s most recent win came Sept. 9, 2017 at Richmond (Va.) Raceway. With the win – the sixth of his career – he automatically advances to the semifinal round of the playoffs regardless of how he finishes in the next two races.

"This was a really critical win," Larson said after the race. "Everybody in this playoff deal is going to be stressing next week at Talladega except for me, so that's good. I could still end up on my lid next week but it's not going to matter after this win.

"What a day. This car was really good. After the first stage, I kind of changed my driving style up and I felt like we made the car better at the same time. It really benefited on long runs and that's about as good as I've ever been cutting the bottom around here.

"Just a great combination here. Good to be fast in practice and then be good enough in the race and get the win. I've always wanted to win a Cup race here and I've been close a number of times."

Asked if he thought it was the biggest win of his career, Larson said, "Well, the million dollars earlier this year (he won the All-Star Race) was pretty nice but to my first playoff victory is special. I hope there's another one in our future, especially in the next round.

Alex Bowman finished third, Kevin Harvick fourth and Denny Hamlin – who thought he had an engine blowing up at one point – ended up fifth.

Only eight cars finished on the lead lap in a race that featured only three cautions (two for stage breaks).

Following the break between Stages 2 and 3, all of the lead-lap cars elected to pit with Larson the first off pit road.

On the restart on Lap 249, Larson was followed by Hamlin, Harvick, Erik Jones, Bowman and Truex (who had a slow stop).

With 130 laps remaining in the race, Larson had moved out to a more than 3-second lead over Hamlin. Jones ran third, Harvick fourth and Truex had moved into fifth.

Eight laps later and still running second in the race, Hamlin was told by his team that his “straightaway speed still looks fine” and to “settle in.”

Truex got around Jones on Lap 288 to move into the third spot behind Larson and Hamlin.

Ryan Blaney pit under green on Lap 299 after complaining over his team radio that he had no brakes. After a quick examination by his team on pit road, Blaney drove his No. 12 Ford to the garage for repairs.

On Lap 307, Truex got around Hamlin and moved into the second position, just over 4 seconds behind Larson.

With 80 laps to go, several lead-lap cars began their final round of green-flag pit stops to get new tires and enough fuel to make it to the finish of the race.

Jones was penalized for speeding on pit road during his stop and was forced to make a pass-through penalty.

On Lap 329, Paul Menard was the last car to pit, turning the lead back over to Larson. He held a more than 5-second advantage over Truex with Hamlin in third.

With 50 laps remaining, Larson’s advantage over Truex held steady at 5.7 seconds as Bowman moved into the third position. Hamlin was fourth and Harvick fifth.

After 360 laps, Truex had closed to within 2 seconds as Larson had difficulty navigating lapped traffic.

With 30 laps to go in the race, Larson’s lead had stabilized at about 3 seconds over Truex. Bowman was third, 8 seconds behind the leader.

Larson’s end over Truex remained at 4 seconds with 15 laps remaining. Without a caution, Larson appeared to be on his way to ending his more than two-year winless streak in the Cup Series.

Landon Cassill fell off the pace with eight laps to go after running out of fuel but was able to reach pit road without a caution.