© 2021 Motorsport Network. All rights reserved.
TV Buy tickets Store
Previous / Clint Bowyer on new aero rules: "We're all in this together" Next / Johnson 'always had a bit of enjoyment in shutting up' doubters
NASCAR Cup / Breaking news

NASCAR officials feel “pretty good” about the testing of its new aero package but don’t plan to declare any sort of victory. 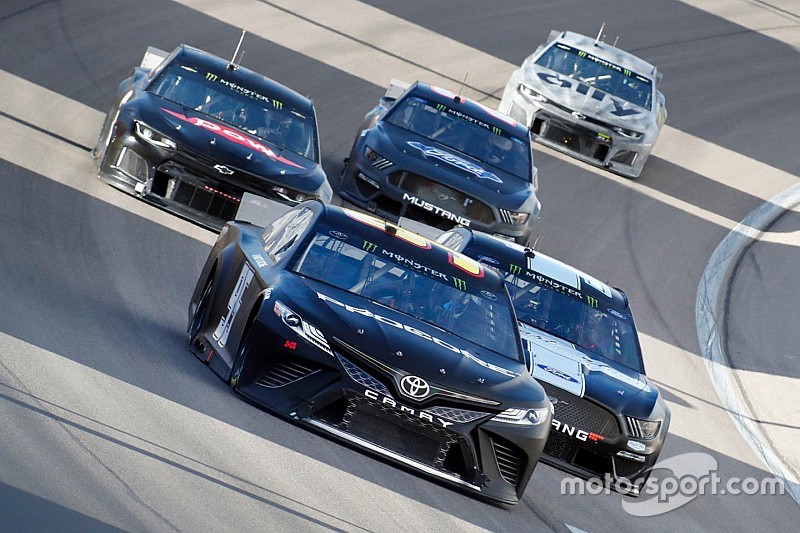 Thursday was the first of a two-day Cup Series test session of the 2019 aero package at Las Vegas Motor Speedway, the first opportunity to see the rules’ effects with more than just a handful of cars on the track.

The second session saw more on-track action than the first, including some three- and four-wide moves through the corners. The final session was much like the second.

“I feel pretty good so far. Even in the first session, where they all started single-file pretty all spread out, you saw that cars that weren’t good in the early part of the run, by the time you got to about seven (laps) to go, they worked back to the front,” said John Probst, NASCAR’s vice president for innovation and racing development.

“I’ve been doing this long enough to know even when days go rough, it’s probably not as bad as how you feel in the moment. And like today, we feel like things have gone pretty well, but by no means are we high-fiving and declaring any kind of victory.

“We still know we have a lot of work to do.”

NASCAR was especially pleased with teams’ participation in the drafting sessions, which are key for both the series and teams to get a better understanding of how races may play out.

The only previous test this offseason with the new package came earlier this month at Auto Club Speedway in Fontana, Calif., but since it was a Goodyear tire test only three teams participated.

“Normally if you had asked them to do a two-wide race simulation there would be a lot of people that would be late to the start of that,” Probst said. “When we gave them five minutes (to go before the first drafting session), I was actually surprised, I felt we would only have half the group out there.

“We had everyone except for one car that was having some issue. They ran side-by-side for quite a while and I honestly feel like they are all giving it an honest go. That’s all we can ask.”

Criticism of the package

Probst acknowledges there are drivers who continue to voice their displeasure with the new package – including Kyle Busch on Thursday – but he hopes the package is ultimately judged on the quality of racing it produces.

During a media availability Thursday, Busch repeated his criticism that the new aero package takes the “driver skill away from the drivers."

“These drivers, some or going to love it, some are going to hate it, no matter what we race. I was just encourage fans who are on the fence to give it a try, I think they are going to be pleasantly surprised at what they see at the race track,” Probst said.

“For the drivers we know who don’t like it, they are very good at what they do and they get paid a really good chunk of money to do things that take a lot of talent. If they want to spout off about (this racing) not needing a whole lot of talent, then eventually that will hit them in the pocketbook, too.

“They should be careful.”

Clint Bowyer on new aero rules: "We're all in this together"

Johnson 'always had a bit of enjoyment in shutting up' doubters