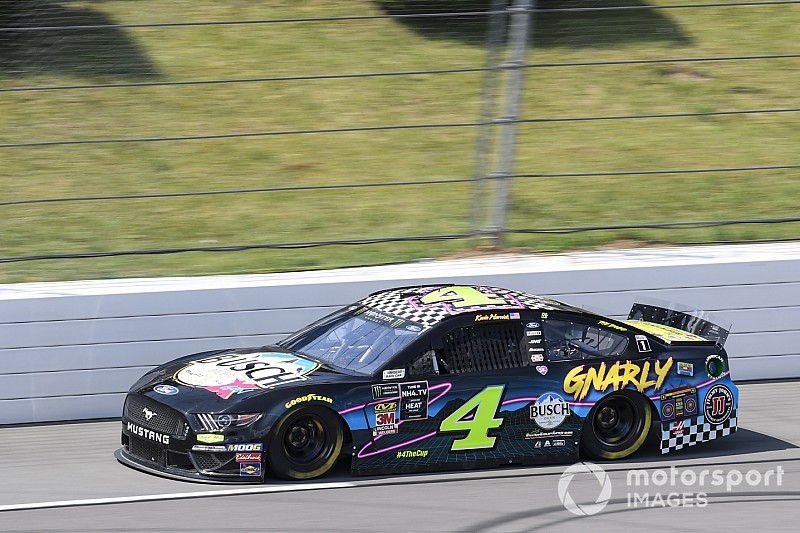 There were many drivers Sunday at Pocono Raceway worried if the race went green to the end but Kevin Harvick was not one of them.

Harvick had taken four new tires on his final pit stop in the race and as Sunday’s Gander RV 400 wound to a conclusion, crew chief Rodney Childers told him he had plenty of fuel to make it to the finish.

By Lap 147 of the scheduled 160, Harvick had moved up to third after restarting 16th and was running down leader Denny Hamlin and Martin Truex Jr. with fresher tires.

On Lap 153, however, NASCAR was forced to throw a caution when Josh Bilicki’s No. 53 Chevrolet came to a stop on the track.

“If the caution doesn’t come out, I think we were in good shape, but that’s the way it goes, especially at this place,” said Harvick, who is still looking for his first NASCAR Cup Series win at Pocono.

Harvick lined up third on the restart with four laps remaining but struggled to get going on the inside lane.

Another caution came out for a wreck off Turn 2 after the restart and Harvick found himself back in fifth when the race went into overtime. He ended up finishing sixth.

“It was a good day. We had the right strategy and I just didn’t time those last two restarts right and our car struggled a little bit on the first lap or two to get the front to turn,” he said.

Harvick, fresh off his first win of the season last weekend at New Hampshire, began his Pocono weekend by winning the pole.

He finished third in Stage 1 and second in Stage 2.

“Everything is going good, we just have to keep improving and doing the things that we’re doing,” he said.

Erik Jones: "It's a bummer" to come so close to another win