SONOMA, Calif. – Jamie McMurray saved the best for last on Saturday in winning the pole for Sunday’s Toyota/Save Mart 350 at Sonoma Raceway in record time.

The last driver to make his first attempt in the 10-minute second round of NASCAR Sprint Cup Series knockout qualifying, McMurray knocked AJ Allmendinger off the provisional pole for the first road course race of the season.

McMurray’s speed of 96.350 mph eclipsed Marcos Ambrose’s 2012 track qualifying record of 95.262 mph. Allmendinger went out early in the final session, and his speed of 96.088 mph held up until McMurray made his late run.

The Coors Light Pole award was McMurray’s 10th in 418 Sprint Cup races and his third at Sonoma. His track record was the 11th set this year under the new knockout qualifying system. 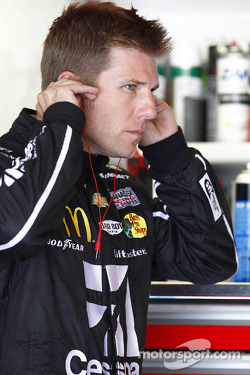 And McMurray won the pole after bumping his way back into the top 12 in his second run in the first round.

“I was a little disappointed that we had to go back out and make another lap to get into the top 12, because I thought that was going to ruin our chances of getting a good spot or sitting on the pole,” McMurray said.

“This knockout qualifying, it’s an emotional roller coaster, from not making it in the top 12 and having to go back out and bump your way in to then being on the pole. There’s a lot of highs and lows that go with that.

“It’s really cool for us to get bumped out and then come back and sit on the pole.”

Allmendinger’s front-row effort came as something of a surprise for the driver of the No. 47 JTG/Daugherty Racing Chevrolet.

“I was nervous about qualifying,” Allmendinger said. “Quite honestly, we weren’t that good in qualifying trim (during Friday’s practice), so to be on the front row, it could be a lot worse, and we’ll go racing tomorrow.”

Larson said he discussed every corner with McMurray and put the knowledge to use.

“It’s great to have a teammate like that who’s willing to help in every respect,” Larson said. “We waited a while to go (in the first round) just to get a clean lap. I think that was pretty key for the first session, to get into the top 12.

“I thought I gave up time in a couple of spots. It would have been nice to get the pole, but Jamie was really fast there. But good day—it was a lot better than I thought I was going to qualify.”

In the first round, 22 drivers beat the Ambrose’s old track record. Logano led the way at 96.197 mph, a number he posted on his second run. That eclipsed the speed of Allmendinger, who ran 96.111 mph on his only timed lap of the 30-minute first round.

Even though tires fell off from one run to the next, many drivers improved their times on their second runs, as the track took on Goodyear rubber, after the K&N Pro Series West had qualified earlier Saturday morning on Hoosier tires.

The major surprise of the first session was Ambrose’s failure to advance to the final round. The Australian driver, a perennial favorite at every road course, could do no better than 23rd in two attempts and will start from that spot on the grid on Sunday, one place behind six-time series champion Jimmie Johnson.

Can-Am Duels preview: One last shot to make the Daytona 500