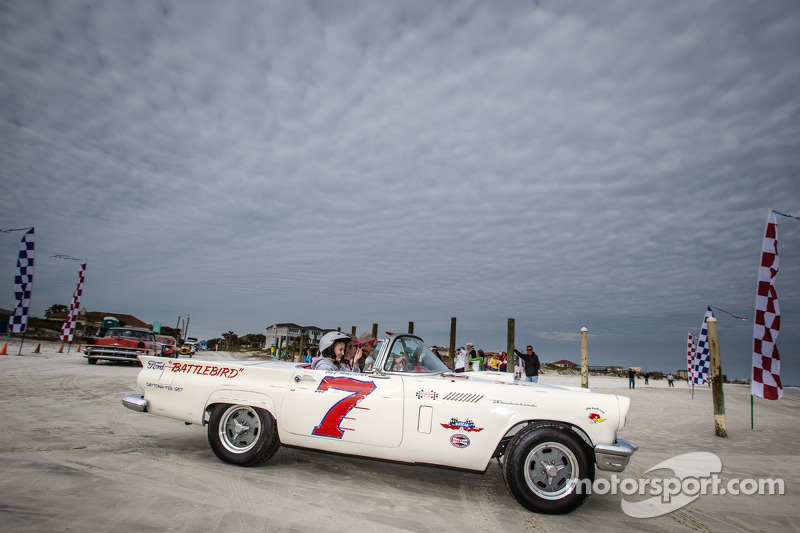 Daytona Beach, Fla. – Prior to the opening of the Daytona International Speedway, racing took place on the beach on the south end of the famed beach. Racers careened around a unique 4.1-mile oval half on pavement (A1A) and half on the packed sand of the beach. Although the last race on the sand took place in 1958, old-timers gather annually to reminisce and tell tall tales.

One of their annual activities is to parade around on or near the old course. To the delight of a large crowd of onlookers, they did just that over the weekend, taking their old cars around the actual course. In previous years, they weren’t allowed on the beach and in particular, on a portion of the old course. After gaining requisite approvals and agreeing to specific terms, the restrictions were lifted, allowing some four dozen old-time vehicles to take an exhibition lap. 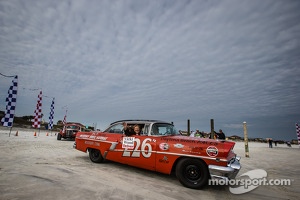 As usual, Ms. Wood, thought to be in her late 80s, headed the parade, riding in a restored Ford Thunderbird. “It sure is fun to be here and brings back a lot of memories,” she said. “It doesn’t seem that long ago that I went 150 miles per hour (in a speed run on the beach). I like seeing everyone each year.”

Truelove gained national fame when he flipped his Mercury in a spectacular wreck in 1956. He has restored the car and tows it from his Connecticut home each winter. “I have been working on my car, and I having a wonderful time here,” said Truelove, who is always a fan favorite.

For the rest of the month, the old-timers will be making appearances and enjoying their time in the sun. Also, they will be making plans for their 2014 reunion.