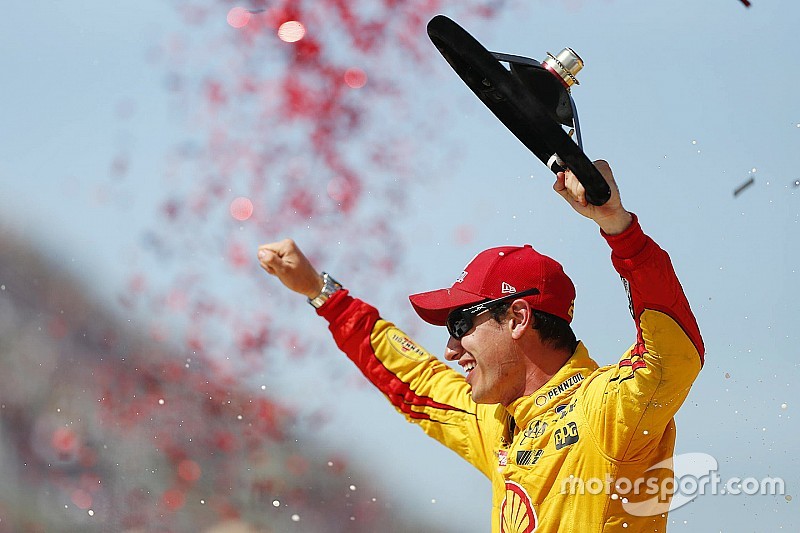 The luck was with Joey Logano in the Irish Hills of Michigan on Sunday.

Logano started from the pole led a race-high 138 laps for his 15th career Sprint Cup win and his first of 2016. For Logano, it was second victory from the pole at Michigan International Speedway. He pulled off the feat in 2013.

“Perfect execution, awesome job,” Logano told the crew. “That’s what we need to do guys. Get ready to party.”

Logano beat Chase Elliott to the line by 0.889-seconds. Kyle Larson was third followed by Brad Keselowski and Kevin Harvick.

Larson's No. 42 Chevrolet failed the Laser Inspection Station part of post-race inspection. Any penalties will be announced by NASCAR later this week.

Harvick remains on top of the Sprint Cup standings with a 30-point advantage over Kurt Busch. Logano gained three spots and moved back into the top five.

Carl Edwards finished sixth followed by Tony Stewart, who delivered a season-best seventh after running in the top five for most of the race. Austin Dillon, Jamie McMurray and Kurt Busch rounded out the top 10.

Elliott led 35 laps. The rookie had the lead on the Lap 154 restart when he missed a shift and gave Logano the lead.

“You can’t expect to do dumb stuff — and I did today,” said Elliott, who dropped to fourth but recovered for a career-high second-place finish. When asked what the driver could have done differently, Elliott replied, “Putting it in the correct gear would be a good start.”

The race was slowed by nine cautions — with an unusual number triggered by Chase regulars. Martin Truex Jr. collided with Clint Bowyer on Lap 46 entering Turn 3 to spark the first yellow flag. Kyle Busch’s car caught fire on Lap 52 and rode the smoldering No. 18 Toyota into the garage. On Lap 62, Dale Earnhardt Jr. found himself in a precarious spot as he went three-wide between rookie Chris Buescher and AJ Allmendinger. Earnhardt received the worst of it and suffered his fourth DNF of the season.

Jeffrey Earnhardt was a repeat offender — igniting Cautions 4 and 5. After wrecking in Turn 2 on Lap 102, he left the track in flames six last later. Danica Patrick was collected in a three-wide incident involving Casey Mears and Brian Scott in Turn 2 on Lap 155 following the sixth caution for debris. Jimmie Johnson and Ryan Blaney hit the wall on Lap 162. Blaney was running 12th, then became loose entering the corner. Trevor Bayne, who was several cars behind the No. 21 Ford, slowed then slid into Johnson.

The ninth and final caution occurred on Lap 189. Denny Hamlin ran over debris and blew out the left rear tire on the front stretch. Hamlin, who was running 12th at the time, lost control of his car and was along for the ride through grass and into the SAFER barrier at the exit of pit road.

Logano’s victory was the 50th for Team Penske with Ford Performance and the eighth for Penske in Sprint Cup at Michigan.

“Team Penske (gave me a) great race car,” Logano said in Victory Lane. “Everyone did a great job understanding what this package was going to do. They put together a great race car for me. It was a lot fun racing with Chase there at the end. He and Larson had the restarts figured out down at the bottom, pushing each other. But I still feel I had to take the top.

“I wasn’t excited about seeing all those cautions, but what a great finish…Ford, this is in their backyard, Roger’s backyard, what a great place to win.”