Looking at NASCAR's New Aero Rules By: Bill King Doug Randolph, crew chief of the No. 10 MBV/Valvoline Chevrolet of Scott Riggs, talked about the effect of the one-inch reduction in rear spoiler height on the performance of the Nextel Cup ...

Doug Randolph, crew chief of the No. 10 MBV/Valvoline Chevrolet of Scott Riggs, talked about the effect of the one-inch reduction in rear spoiler height on the performance of the Nextel Cup racecars. 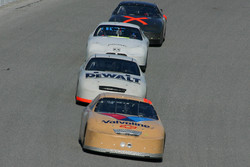 Scott Riggs leads the pack.
Photo by Motorsport.com.
"It's going to be very difficult for everybody. We had a Kansas test toward the end of the year and we tried the new rules. We obviously were using the 2004 tire and not the new one that Goodyear will have at Daytona.

"If you take the crew chief's bag and you dump everything out, that's basically what we had to do at the test. We managed to get the car where the driver was comfortable out there by himself. The big question is going to be in traffic. If the drivers can't be comfortable in traffic, then I think the racing's not going to be as good. Traffic's going to take away what little downforce you do have. I think all of us are concerned about that. And you're not going to answer many questions in a single car test. You need 10 or 12 cars out there running together.

"Downforce is like a lot of other things in life. If you don't know about something, you worry about it. But once you know about it.

"If you found some gimmick that gives you 50 pounds of extra downforce under the old rules, it wasn't a huge advantage. Under the new rules this year, 50 extra pounds of downforce is going to be a big deal.

"The big thing in our industry is being able to adapt to changes. That's where the bigger organizations that have more resources, more manpower can adapt more quickly when the rules changes are made."