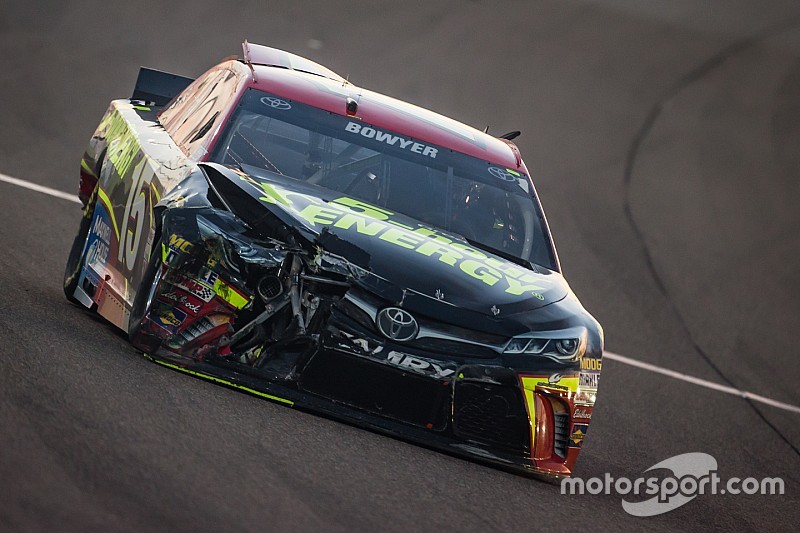 All the focus was on the Sprint Cup title fight at Homestead, but in the background of the title decider was the end of Michael Waltrip Racing.

In 2007, MWR arrived on the fulltime scene in a big way with a three-car fleet and backing from Toyota, a manufacturer that was making their debut at the premier level of NASCAR.

And so it begins

Team owner and two-time Daytona 500 champion Michael Waltrip piloted the No. 55 with long-time sponsor NAPA joining him in this new endeavor. 1999 Sprint Cup champion Dale Jarrett was at the helm of the UPS No. 44. In the No. 00 with sponsorship from Domino's was rookie David Reutimann.

Speaking of the future at the team's announcement, Waltrip hoped that MWR would become "a team that eventually, people are going to say 'wow.'" That statement did not go unfounded.

Setting a precedent for the team, they made headlines right out of the box in the worst way possible. On February 14th - four days before the 500 - NASCAR discovered an 'unknown foreign substance' in the intake manifold of the No. 55 Toyota.

Series officials impounded the car and disallowed Waltrip's qualifying time. Crew chief David Hyder and competition director Bobby Kennedy were ejected from the track and a massive penalty was levied against the new team - a $100,000 fine and the loss of 100 driver and owner points.

Despite the firestorm surrounding them, all three cars managed to make the big race, finishing 22nd, 30th, and 40th. Waltrip went into his first season as a team owner with negative 27 points.

From missing shows to winning races

MWR fought week-to-week to make each show during their debut season and it was an uphill battle. Waltrip DNQ'ed 19 times while Jarrett failed to make the show on 12 occasions and Reutimann eight.

Waltrip himself was the first driver to score a top ten finish, doing so twice and even taking pole position in the second Talladega race. Businessman and racing enthusiast Robert Kauffman became co-owner of the team later in the year, pumping some much-needed cash into the struggling operation.

It wasn't until 2009 when they finally reached Victory Lane in a rain-shortened Coca Cola 600, won by Reutimann. The car - commonly referred to as the 'Aaron's Dream Machine' due to the sponsorship - lived up to its moniker. MWR were finally winners. The organization also brought their weekly entries down from three to two cars for 2009.

Reutimann established himself as the team's flagship driver, consistently out-performing his teammates and in 2010, he won again. This time, rain was not a factor in his triumph at Chicagoland Raceway. Waltrip also stepped out of the fulltime driver role that year, replacing himself with Martin Truex Jr.

In 2012, MWR shifted from weekly contenders to title challengers. Clint Bowyer replaced Reutimann after leaving Richard Childress Racing and the car number was changed from the No. 00 to No. 15 with backing from 5-Hour Energy as the primary sponsor. He was teamed up with Truex in the NAPA No. 56 and both drivers earned Chase berths. The No. 55, with Aaron's sponsorship for most of the season, was also brought back as a fulltime entry. The car was shared by veteran Mark Martin and Brian Vickers.

Bowyer ended up winning three races en route to second in the championship standings, 39 points shy of the crown. And that was even after a seething Jeff Gordon took action against Bowyer in a feud that came to a fever pitch in the penultimate race of the season when Gordon deliberately wrecked Bowyer, leading to a brawl in the garage area.

MWR had surely solidified their place in NASCAR for years to come - or so we thought.

2013 started as another solid year for MWR. Both Truex and Vickers captured the checkered flag during the regular season and Bowyer and Truex once again made the Chase cut. But that didn't last long...

With eight laps to go in that Richmond race, Bowyer spun and the consequent late-race caution helped Truex secure a spot in the postseason. Speculation immediately arose that the spin may have been intentional with Dale Earnhardt Jr. suggesting that it looked sketchy from his perspective, behind Bowyer.

The incident soon became headline news when suspicious radio communication from both the No. 15 and No. 55 teams caught the public's intention. The now infamous conversation between Bowyer and his crew:

Bowyer: "Well that kind of sucks."

20 seconds later, Bowyer spun and the race was placed under caution.

NASCAR reacted in a big way, pulling Truex out of the Chase, indefinitely suspending general manager Ty Norris and fining MWR $300,000 - the highest fine issued in the history of the sport. Both drivers and teams were also docked 50 points.

Their attempted manipulation of the Chase and ending of the race had consequences going beyond NASCAR's wrath. The scandal - known as 'SpinGate' - led NAPA to cut ties with Waltrip, ending their 12-year relationship. NAPA pulling the plug was a catastrophic blow to MWR, forcing them to shut down the No. 56 car, letting both Truex and several employees go in the process.

This was the beginning of MWR's descent back down towards mediocrity. SpinGate left an indelible and eventually fatal mark on the operation. After struggling through the 2014 and 2015 seasons, Kauffman opted to withdraw his funding and look elsewhere in the NASCAR garage. Even though Bowyer was able to make the Chase, the team knew that they were ten weeks away from going under.

With that in mind, the No. 15 team entered the postseason with determination to go out on a high note. However, that all came to a screeching halt after the first race of the Chase when yet another scandal rocked the ailing race team.

A P4 level infraction was discovered on the opening Chase weekend, which involved adding/manipulating components to get the track bar to move. Both Bowyer and MWR were docked 25 points while crew chief Billy Scott was suspended for three races and fined $75,000.

Bowyer was eliminated from the Chase at the conclusion of the first round, going on to finish last in the postseason standings.

In the season finale, both MWR cars were involved in the same crash early in the race, finishing 27th and 43rd in their final showing.

A quiet end to MWR

With all the focus on the title contenders, most didn't have time to acknowledge the end of Michael Waltrip Racing. It's almost poetic how the team that managed to make so much noise throughout their existence was able to quietly fade into the night, almost completely unnoticed.

The team's time at the Cup level is reminiscent of a Shakespearean tragedy. They tasted victory, they knew defeat, and endured the scorn of the same people who once admired them for what they had accomplished.

Some fans may impulsively say good riddance to MWR, but I'll simply say goodbye and good luck to their employees as they go in search for new homes. Regardless of their transgressions, you have to tip your hat to a new entry in this era of NASCAR that can enjoy the success MWR did at the Cup level.

A contingent of people will say they didn't make it, but that's not a fair assessment. They did make it, but their presence in the sport was fleeting. Less than a decade and they're gone, but unlike many failed upstart race teams with dreams of glory at the pinnacle of stock car racing, we'll always remember that Michael Waltrip Racing was here.

It's better to burn out than to fade away, right?