Mark Martin in a zone all his own in Arizona 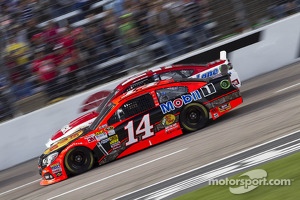 Martin was there for Alan Kulwicki’s breakthrough victory 25 years ago, where the pioneering driver/owner scored his first victory in NASCAR’s elite series. Martin competed on the track’s old layout that included a unique dogleg on the backstretch. And he continues to compete on the reconfigured layout that debuted in late 2011. Martin leads the series with 33 starts at Phoenix, four more than any other driver. Only Jeff Gordon and Bobby Labonte are closest with 29 starts apiece.

Martin’s 34th Sprint Cup start at Phoenix and the 881st of his illustrious Sprint Cup career will come Sunday in the AdvoCare 500k. He will again pilot the No. 14 Mobil 1/Bass Pro Shops Chevrolet SS as he continues to sub for the injured Tony Stewart, who broke his right leg in a sprint car crash Aug. 5.

The last time Martin raced at Phoenix was when the Sprint Cup Series visited the desert mile in March, where he won the pole and led 75 laps. It was Martin’s third pole at Phoenix, and the 75 laps led boosted his Phoenix tally to 911 laps led. It was an example of Martin’s prowess at Phoenix, one that in addition to those poles includes two victories among other notable anecdotes:

Martin is one of eight Sprint Cup drivers who have more than one win at Phoenix. The others are Jimmie Johnson (4), Kevin Harvick (3), Davey Allison (2), Jeff Burton (2), Dale Earnhardt Jr. (2), Gordon (2) and Carl Edwards (2). Martin, however, is the only driver to win at Phoenix with two different manufacturers: Ford (1993) and Chevrolet (2009).

Martin and Johnson lead the Sprint Cup Series in top-fives at Phoenix with 12 apiece.

Martin claims his success at Phoenix is due simply to having good racecars. In his 33 starts at Phoenix, he’s driven for five different team owners: Jack Roush (21 starts), Bobby Ginn (1 start), Dale Earnhardt (2 starts), Rick Hendrick (6 starts) and Michael Waltrip (3 starts). That’s a lot of good racecars across a lot of teams. The one constant has been Martin.

That continuity is what drew Stewart-Haas Racing (SHR) to Martin when it was clear that Stewart’s injuries would keep him out of the No. 14 Mobil 1/Bass Pro Shops Chevrolet for the remainder of the 2013 season. Martin’s 40 victories, 56 poles, 271 top-fives, 453 top-10s and 12,879 laps led dating back to his Sprint Cup debut on April 5, 1981 at North Wilkesboro (N.C.) Speedway provided stability to SHR in a time of unrest.

Now Martin prepares to race at Phoenix for his sixth different team, but one that has a pedigree of winning, just like Martin. With the penultimate race of the 2013 season set to go down this Sunday at one of Martin’s most productive racetracks, the veteran racer eyes opportunity in the AdvoCare 500k.

Your record at Phoenix is pretty stout. What has made you so good there?

“It’s easier for me to just say I’ve had great racecars there. I don’t know why I’ve run well there. I don’t particularly like flat tracks. That one is on the high-banked side of flat. It does have some banking, but it’s closer to a flat track than a superspeedway kind of banking. So the fact that I’ve run well there always, as opposed to Martinsville, is kind of surprising to me. Loudon is not a particularly good racetrack for me either, but Phoenix just always was. I’ve always ran well there. My car went fast. We tuned on it and we had lots of great racecars. I’ve had lots of good runs. It’s really fun to go race there because of the fan support. There is amazing fan support in Phoenix – always has been since the first race there.”

That first race was 25 years ago, and it was won by Alan Kulwicki, who you raced with before you both made it to NASCAR. What are your memories of him?

“Alan and I raced Late Models in Wisconsin for years. For a couple of years, we shared a building that had a wall between us. He was on the other side of the wall with his stuff while we battled for an ASA (American Speed Association) championship. We had interesting times. We were good friends. We were competitors and borderline rivals at one time throughout all of those battles.

“Alan came down and stayed with me in Charlotte when I was racing in NASCAR already. He came down to the Charlotte race, stayed with me at my house to meet people in NASCAR, and he was an interesting guy. Here’s a good example: Driving across town, I’m kind of on the chip all the time and Alan was kind of on idle, expect when he raced the car. So, he was following me to the track the first morning and I was in front of him, he was behind me. We stop at a traffic light. The traffic light changed, so I drive through and he just sits there in the middle of the road. He’s reading the paper and forgets to look up. But that was Alan Kulwicki, and it drove me crazy because I’m on the chip. I want to go to the track and now I have to pull over and wait for him to sit through the light and get caught up.

Will we ever see anyone capable of accomplishing what Kulwicki did – building a team out of nothing to winning a championship?

“I don’t think so. I don’t see that happening in this era. Even if someone did it, it wouldn’t be with their bare hands. It would be building with really smart people. Alan did it in an era when you could do it by yourself if you were determined enough and smart enough and good enough. I don’t think there is someone with the combination of all three today to ever even get near being able to do something like that.”

Explain a lap around Phoenix.

“With its new pavement, Phoenix is pretty restrictive on your lines and what you do. It’s pretty critical when you get down to turn one to make sure that you don’t enter that corner too high or too fast. Then it opens up from there coming off the corner, and it’s almost a non-event after you get the first little part of turn one done. The rest of it you’re just sitting there riding with your foot on the floor around a big, crazy, long up-and-down backstretch before going off into turn three, which is another critical entry to a turn. It’s easy to get in there too hard. You don’t want to get in too high or too hard because it will really mess up the rest of the corner. And then the exit of turn four can be pretty tricky as well because it’s the opposite of turn two. It closes back in on you, where turn two just keeps moving away from you, so you know you’re able to open your exit way up off of (turn) two. Off of (turn) four it closes up on you, so you have to make preparations for that before you get to the wall. If you don’t plan for that, you’ll get yourself into trouble.”

Kyle Busch feeling at home in the desert

Martinsville To Put All 43 Pits On Frontstretch