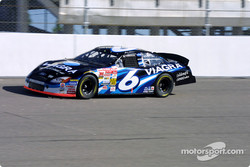 All three were penalized under Section 12-4-Q in the NASCAR Winston Cup rule book ("Any determination by NASCAR officials that parts and/or equipment used in the event do not conform to NASCAR rules."), because of an unapproved front spring.

The left front coil spring on the No. 6 car had approximately 4 3/8 (four-and-three-eighths) coils. The required minimum number of coils is 4 1/2 (four-and-one-half).

This is the third time this season officials have taken points from NASCAR Winston Cup teams because of unapproved coil springs.

Spencer to be released at end of season

Mark Martin: "The history is what it's all about" on Throwback weekend