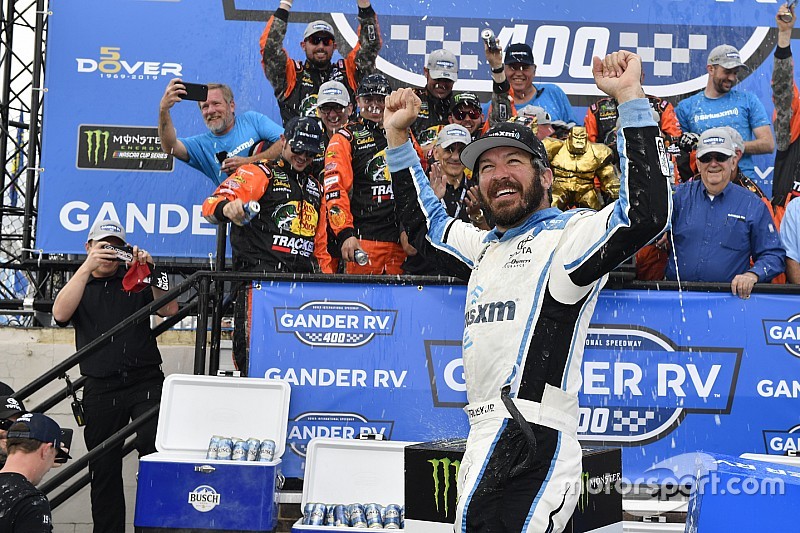 Martin Truex’s victory at Dover (Del.) International Speedway on Monday came a day late and required a long journey from the rear of the field.

With Sunday’s GanderRV 400 postponed due to rain, Truex still had to begin his journey on Monday from the rear of the field after his No. 19 Toyota failed pre-race inspection twice on Sunday.

It took him some time to make his way to the front of the field, but once he did, he never ventured far, winning Stage 2 and easily holding off Alex Bowman to pick up his second win of the 2019 Monster Energy NASCAR Cup Series season.

"Man, it feels incredible. I'm so thankful for this team. What a race car we had today," Truex said after the race. "We have one hell of a team. We came here with a new set-up this time because we kind of had an older set-up than had worked good for several years but it was't good enough.

"Thanks to all these fans that came out today, on a Monday. It's just awesome."

Reminded he started from the back of the field and ended up winning by more than nine seconds, Truex said, "I promise it wasn't easy. It was a lot of work, it was tough. This race car, man, it was just incredible.

"I can't believe if we'd have won at Talladega, we'd have three in a row. A new group of guys this year, Coach (Joe Gibbs) put together a good bunch with (crew chief) Cole (Pearn) and everybody. I'm just really, really proud."

The victory is the 21st of Truex’s career and his third at Dover. Coincidentally, his first career win came at Dover in 2007 in a race postponed until Monday.

Busch is the only driver to finish in the top-10 in the first 11 races of the season, tying a record set in 1990 by Morgan Shepherd.

Following the break between Stages 2 and 3, all of the lead-lap cars elected to pit with Truex was the first off of pit road followed by Bowman, Harvick, Elliott and Brad Keselowski.

The race returned to green on Lap 250.

Kyle Busch tagged the wall on Lap 252 and immediately yelled, “We’ll be done. See you in a few laps,” over his team radio.

On Lap 265, Denny Hamlin spun on the track in Turn 2 after tagging the wall and having a tire go down. There was extensive damage to right-rear of his No. 11 Toyota. Only a handful of cars elected to pit.

On the restart on Lap 270, Truex remained in the lead, followed by Bowman, Elliott, Harvick and Ryan Blaney.

With 100 laps to go in the race, Harvick remained within a second of Truex. Bowman was third, Larson fourth and Elliott ran fifth.

A round of green-flag pit stops began on Lap 320 with Larson, Harvick and Truex among the first to make what could be their final stop for fuel and tires.

Ryan Preece was penalized for an uncontrolled tire during his stop and had to make a pass-thru penalty on pit road.

Daniel Suarez was the last of the cars to pit – and had the entire field at least one lap down at one point. Once he pit on Lap 347, Truex remained in the lead followed by Bowman, Larson and Harvick.

With 50 laps to go, Truex held a more than 3-second lead over Bowman with Larson in third, 4.5-seconds behind the leader.

Truex’s lead had grown to more almost 5 seconds over Bowman with 30 laps remaining. Larson was third and Harvick fourth.

With 10 laps to go, Truex’s lead had ballooned to more than 8 seconds over Bowman. Larson was third, Harvick fourth and Elliott fifth.

Bowman was not able to cut the margin any lower to Truex with five laps remaining.

Kyle Busch: 'The (aero) package sucked. No question about it'