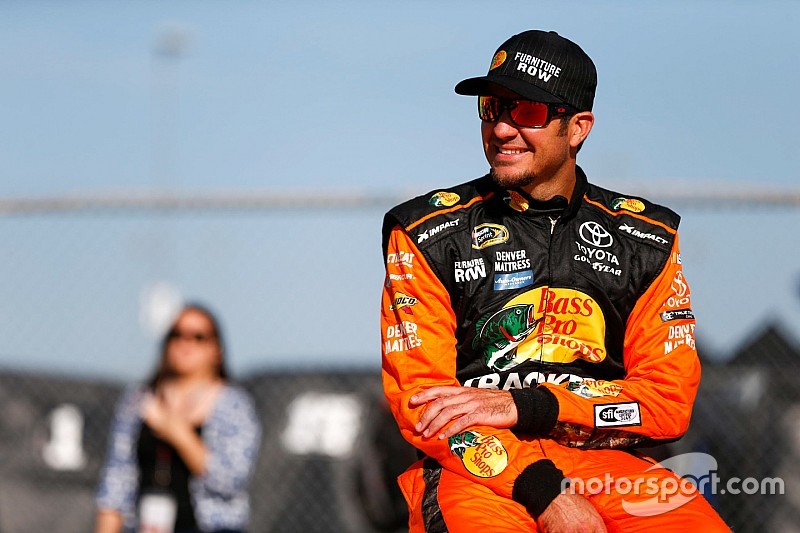 Kenseth dominated the first two rounds of qualifying on Friday but in the final five-minute session, Truex posted a lap at 190.921 mph just edging Kenseth (190.564 mph) for the top spot.

The pole is Truex’s first in the Sprint Cup Series since the 2012 season and eighth of his career.

“We feel like we made some mistakes throughout qualifying and it took us a while to figure out this three round deal,” Truex said. “Things have really been going well for us and clicking well.

“I love this race track. We’ve really been able to perform well here.”

In last spring’s Kansas race, Truex led a race-high 95 laps but ended up finishing ninth. His best performance at the track were a pair of second-place finishes in 2012.

Kenseth again set the pace in the 10-minute second qualifying session, with a single average lap speed of 190.712 mph.

He was followed by Hamlin, Kurt Busch, Truex and Ryan Blaney. Also advancing to the final round were Stenhouse, Edwards, Kyle Busch, Keselowski, Bayne, Newman and Menard.

Joey Logano was among those who attempted a second, late run in an effort to reach the final round but he came up just short when the session expired.

His biggest issue? “Just going faster,” Elliott said. “I thought I overdrove Turn 4 in my last run and that hurt us pretty bad. We’ll try to get our car driving the way it needs to for the race. I was happier in qualifying than I was in race trim.”

As they did in practice earlier Friday, Toyota teams dominated the top of the speed chart in the first 20-minute qualifying session claiming three of the top-five speeds.

Dale Earnhardt Jr. looked like he was going to miss the cutoff in Round 1 but a late-session flyer left in him 19th place.

“The back is getting edgy without any improvement with the front grip,” Earnhardt said over his team radio following his last-minute attempt.

Among those who failed to advance to Round 2 were Kevin Harvick (26th), Kasey Kahne (27th) and A.J. Allmendinger (29th).

“I should have stayed on the bottom,” Harvick said over this team radio. His spotter, Tim Fedewa, replied, “You tried – that’s all that matters.”

NASCAR's low downforce package proves quite a test for Goodyear