Solving Martinsville puzzle is top of mind for Truex Jr.

When describing his feelings about Martinsville Speedway – the next stop on the NASCAR Sprint Cup Series tour – Martin Truex Jr. said that he’s had a love-hate relationship with the southern Virginia short track.

“To be honest, Martinsville is a place I still haven’t figured out,” said a candid Truex. “I have had some good runs over the years there, but it has been very inconsistent. There have been times I’ve been fast there and times I couldn’t get out of my own way.”

What Truex is saying about the half-mile oval is a common feeling among most of the drivers competing in NASCAR’s premier series. 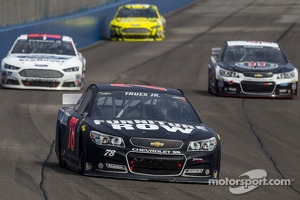 “The biggest challenge about Martinsville is the track changes so much throughout the weekend,” explained Truex. “And the track is never on Sunday what it was like all weekend. As soon as they drop the green flag the track is completely different than it was the day before when you felt you had your car dialed in for the race.

“The Martinsville track continues to present a lot of challenges and you still need to take care of your brakes there. But brakes aren’t as big of an issue as they used to be at Martinsville, but you can still burn them up. You have to be careful.”

Truex, who is in his first season driving the No. 78 Furniture Row/Denver Mattress Chevrolet, is looking for that breakthrough race in Sunday’s STP 500.

“We need to start finding a rhythm with this Furniture Row Racing team,” said Truex. “Things have not gone our way so far this season. Some of it is our fault and a large part has been a lot of bad luck.”

Truex is coming off one of those “very tough luck” weekends with an adversity-filled 23rd place finish at Auto Club Speedway in Fontana, Calif.

“We had too many things go wrong last weekend, which is too bad because I felt we had something for the California track,” noted Truex. “Going to a backup car after a flat tire sent our primary Chevrolet into the wall in practice was a big hurdle to overcome.

“We were also confronted with more issues during the race. Before Lap 30 we suffered a cracked splitter due to flying debris. That put us at an aerodynamic disadvantage for almost the entire race. And later in the race we had more damage to the front-end as a result of the broken splitter.”

Truex and the single-car Furniture Row team are looking for a clean race, but coming away with an unmarked and undented car at Martinsville would be an exception rather than the rule at the historic flat track, the shortest (0.526 miles) on the NASCAR circuit.

“We understand the challenges and the uncertainty of Martinsville,” said Truex. “But when this Furniture Row team goes to a race, we feel confident that we can put together a strong race and be a contender. This weekend is not any different.”