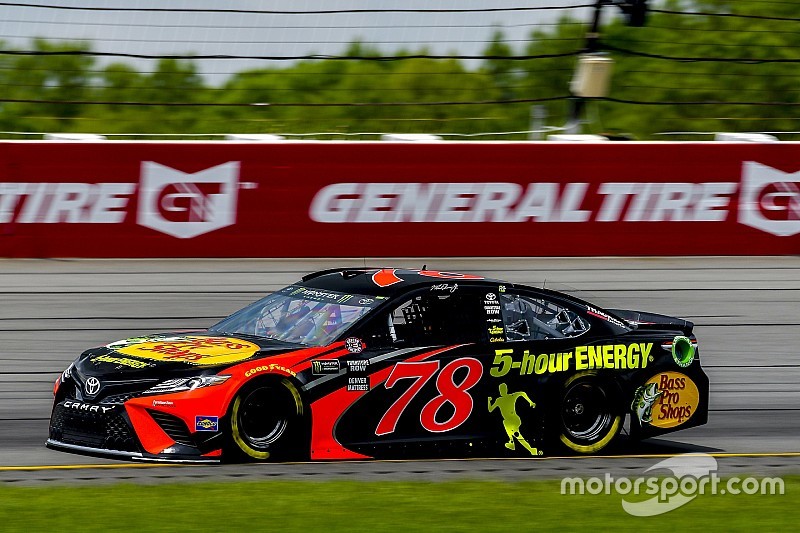 Martin Truex Jr. passed Kevin Harvick with six laps to go to pick up the Stage 1 victory at Pocono Raceway.

Blaney, who started on the pole, held off Harvick to take the lead at the start, with Kyle Busch quickly moving into the third position.

On Lap 3, Kyle Busch powered past Harvick off Turn 3 to move into the runner-up position. “I got tight on the throttle,” Harvick said over his team radio. “Had to lift.”

On Lap 9, Harvick got back around Busch in Turn 3 to retake second place.

Three laps later, Harvick ran down Blaney to take the lead for the first time in the race.

Blaney dove down pit road on Lap 16 to short-pit and ensure he had enough fuel to make it to the end of the first stage.

By the time everyone had completed the green-flag cycle of pit stops, Harvick reemerged as the race leader on Lap 35.

Busch was not pleased with how his car was handling after his stop. “I don’t know what the (expletive) happened, but it’s junk,” Busch said over his team radio.

With 10 laps in the stage, Harvick held a slight lead over Truex. They were followed by Kyle Busch, Blaney and McMurray.

With six laps to go, Truex powered around Harvick on the outside to take the lead for the time in the race.

Just before the conclusion of the stage, Joey Logano hit pit road as his No. 22 Ford appeared to have run out of gas.