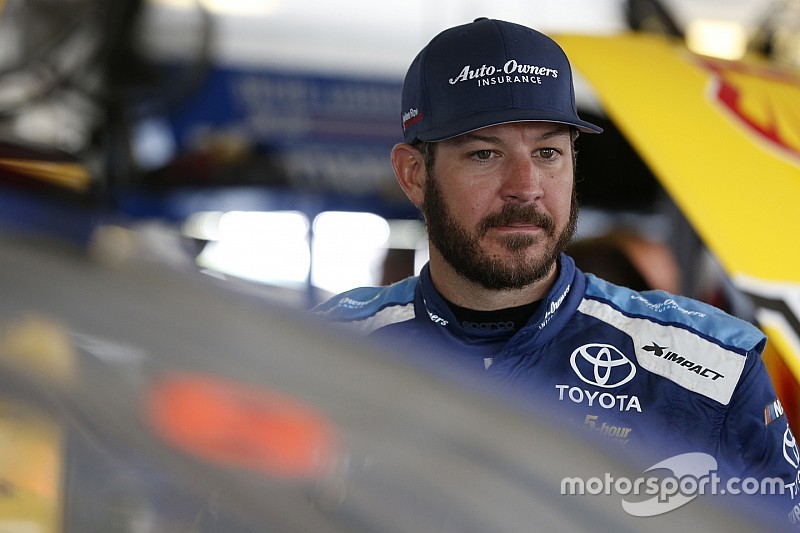 Martin Truex Jr. held off Kevin Harvick for most of the first 100 laps while earning the Stage 1 victory at Richmond (Va.) Raceway.

Harvick, who started on the pole, took command early and after 20 laps held a small advantage over Truex with Kurt Busch in third.

With 60 laps remaining in the stage, Harvick continued to lead over Truex, only to see Truex finally get around Harvick on the inside in Turn 1 to take the lead for the first time on Lap 41.

Truex moved out to more than a one-second lead with 50 laps still to go in the first stage. Keselowski moved up into third, followed by Kurt Busch and Almirola.

On Lap 53, Stenhouse and Hamlin made contact, which sent Hamlin for a near-spin but he continued on and there was no caution.

Hamlin had to make a green flag pit stop to change tires. When he returned to the track he was running 26th and one lap down.

With 30 laps remaining in the stage, Truex held a small advantage over Harvick and Keselowski continued in third, more than two seconds behind the leader.

On new tires, Hamlin made his way around Truex and unlapped himself with 19 laps left in the first stage.

With 10 laps left, Truex held about a half-second lead over Harvick. They were followed by Keselowski, Kurt Busch and Elliott.

Before the race, the teams of Daniel Suarez, David Ragan and Regan Smith all had their respective qualifying times disallowed when the failed pre-race inspection. They all moved to the back of the field.

Kyle Busch had to start from the rear of the field after his team worked on his No. 18 Toyota to repair damage during the impound.