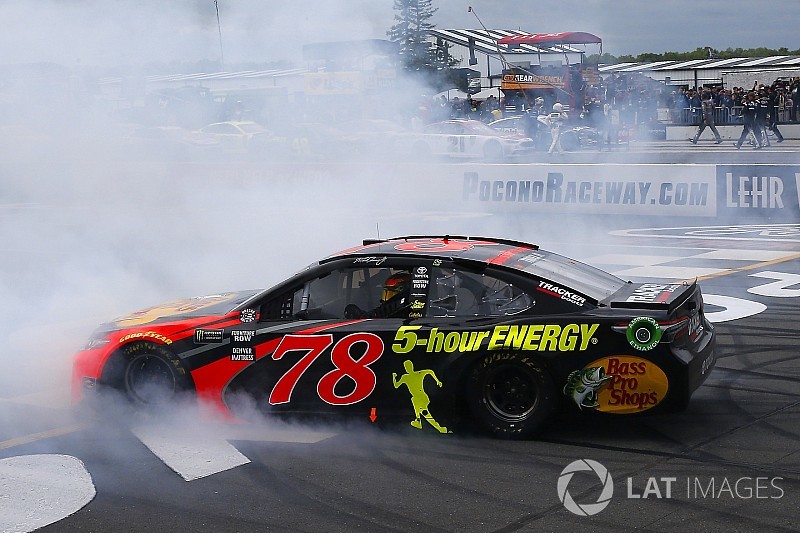 Truex came back from trouble on pit road and held off a fierce challenge from Kyle Larson on the final restart before pulling away to a nearly 2.5-second win in Sunday’s Pocono 400 at Pocono Raceway.

The win is the second this season for the reigning series champion and 17th of his career.

"You're always concerned (about being on older tires) on restart, so much can happen in those things, but we were able to get a good restart," Truex said in Victory Lane. "We had a good practice yesterday and really it was a good weekend overall. I feel like we're getting back to what we were doing last year.

"It's a heck of a day. The 4 (Kevin Harvick), the 18 (Kyle Busch), the 78 (himself) - we went at it all day long and we came out on top. It's always fun to win but especially when you beat the best guys out there and we did that today.

"I think we were all pretty equal, it was who got out front. (Harvick) and I stayed on (older) tires. We felt like in practice we were really fast on scuffs so Cole (Pearn, crew chief) made a good call and we stayed out.

"Once we got clear air, man, it was a rocket ship."

Kyle Busch, who had the freshest tires at the end of the race, could only get up to third. Kevin Harvick, who led the most laps (89), was fourth and Brad Keselowski completed the top-five.

Following the break between Stages 2 and 3, Harvick was the first off pit road and remained out front when Stage 3 went green on Lap 107. Austin Dillon took two tires and came out second, followed by Kyle Busch and Truex.

On the restart, Kyle Busch moved into the second position behind Harvick while Larson moved up into third.

With 51 to go, Truex reported a “slight vibration” on his No. 78 Toyota and asked his team if they got all the lug nuts tight on his stop.

Darrell Wallace Jr. fell off the pace shortly after the restart after apparently missing a shift and headed to the garage with a mechanical issue. He did not return to the race.

Harvick held a lead of just over a second ahead of Kyle Busch with 45 laps remaining in the race. Truex has moved up to third.

With 36 to go, Derrike Cope spun off Turn 3 with some help from Larson to bring out a caution.

All of the lead-lap cars pit for fuel and tires with Kyle Busch the first off pit road and he took over the lead on the restart with 31 laps remaining in the race. Busch was followed by Harvick, Blaney, Truex and Larson.

Truex quickly got around Harvick for the second spot on the restart as Harvick dropped to third.

NASCAR displayed a caution on Lap 21 for debris spotted in the Turn 1 and it appeared a couple cars had hit it. Most of the lead-lap cars elected to pit but Truex, Harvick, Elliott and Larson remained on the track and held the top-four positions on restart with 17 laps to go.

Larson moved into the second position behind Truex shortly after the restart as Harvick dropped to third. Kyle Busch moved from eighth to first.

With 14 laps left, Denny Hamlin got loose and into Alex Bowman in Turn 1 to bring out another caution. Bowman hit the outside wall while Hamlin hit the inside retaining wall.

Most of the lead-lap cars elected not to pit and on the restart it was Truex, Larson, Harvick, Kyle Busch and Almirola.

Shortly after the leader took the green flag, Erik Jones wrecked after contact from Logano to bring the caution back out.

The race restarted on Lap 153 with Truex in the lead followed by Larson, Harvick, Kyle Busch and Blaney. Busch moved into third shortly after the restart as Truex blocked the advance of Larson.