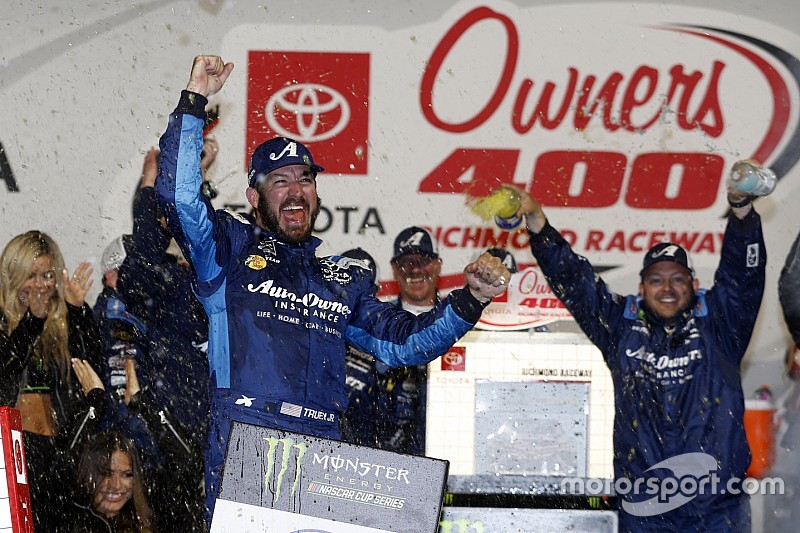 Truex held off a furious charge from Joey Logano over the final three of 400 laps to win Saturday night’s Toyota Owners 400 at Richmond (Va.) Raceway.

The win is Truex’s first series victory in 81 starts on short tracks (less than 1-mile in length).

It’s also Truex’s first win of the 2019 season and he is now the third driver at Joe Gibbs Racing to win in the season’s first nine races (joining Kyle Busch and Denny Hamlin).

"Tonight we didn't have the best car but we've lost here with the best car a bunch of times. We just fought and battled. Being out front was just the key. We're just really excited. Everybody at JGR has done a great job.

"We're just chipping away at it and hopefully we'll get better at it from here on out."

Asked about the battle with Bowyer and then Logano, Truex said, "I was struggling the last 40 laps. I had no front tire and got real tight that last run. I just had to hold them off. Thanks to the pit crew - they had a great night.

"I'm just really happy to get our first win with Gibbs. First short track win is pretty awesome, too."

Following the break between Stages 2 and 3, Logano was the first off pit road followed by Truex, Harvick, Keselowski and Bowyer. The race returned to green on Lap 212.

Truex, Harvick and Keselowski briefly raced three-wide for second before Truex finally came away with the position.

On Lap 217, Kyle Busch had made his way back into the top-10 after his Stage 2 pit road speeding penalty.

On Lap 243, Michael McDowell had a tire go down and hit the wall to bring out a caution. All of the lead-lap cars elected to pit with Truex the first off pit road, followed by Logano, Keselowski and Harvick. The race returned to green on Lap 253.

Keselowski got around Logano to take the second position shortly after the restart. One lap later, Kyle Busch moved back into the top-five.

On Lap 266, Keselowski went to the outside off Truex in Turn 3 to claim the lead for the first time in the race.

With 120 laps to go in the race, Keselowski held a nearly 1-second lead over Truex. Logano was third, Bowyer fourth and Kyle Busch was in fifth.

On Lap 294, Truex went to the outside and was able to get around Keselowski in Turn 2 and reclaim the lead.

With 100 laps remaining, Truex had already moved out to a more than 1-second lead over Keselowski as Logano ran in third.

On Lap 312, Bowyer got around Keselowski and moved into the runner-up position as Keselowski dropped to third.

On Lap 315, several drivers began hitting pit road under green to make their final stop for fuel and tires. Both Aric Almirola and Daniel Suarez were penalized for speeding on pit road during their respective stops and had to serve pass-thru penalties.

Once the cycle of stops were completed on Lap 323, Truex moved back into the lead followed by Bowyer, Logano and Harvick.

With 50 laps remaining, Truex’s lead over Bowyer was under a second with Logano running in third.

With 20 laps to go, Bowyer had moved up to the rear bumper of Truex but was having difficulty trying to complete the pass for the lead.

Bowyer tagged the wall with 13 laps to go, which slowed his momentum a bit and allowed Logano to gain ground in the battle for the second position.

Logano moved into the second position with four laps remaining.

Clint Bowyer third at Richmond: "I thought this was our night"